Appreciating The History And Preparation Of Chinese Food As One Partakes 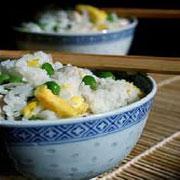 When contemplating Chinese food, one must first consider the fact that in China the preparation of food is as an art and not simply a task. This belief, for the most part, is due to the long history that entails almost all Chinese cuisine beliefs, primarily established by either Confucianism or Taoism.

Regarding Confucianism and Chinese cuisine, records indicate that Confucius actually established the standards for proper table etiquette in China as well as the appearance and taste of Chinese food. One particular area, seen even today, is the presentation; Chinese food is cut up into bite size pieces before being served, which is a standard determined by Confucianism. It is also very poor taste to have knives at a dinner table in China, and the quality of the food as well as the taste, was and still is, of great importance.

Chinese chefs, even today know that just the right blending of herbs and condiments is half the package, and Confucius stressed texture, color, and an overall harmonious experience. Not to be overlooked, Taoism and its relationship to Chinese cuisine also played a large part over time allowing for the fact that all food has healing powers, and as such, should be used in this way.

Take for example ginger, which is often used for colds and upset stomachs. The main quest for Taoists, is to integrate food into the diet that is known for its healing powers, which in turn gives the person more strength and virility.

Another staple that people identify in the Chinese diet is rice. However, in the early history of Chinese food the people knew very little about rice and rarely ate it — certainly never on a regular basis until around the first century. About 200 years later, it moved to the southern regions too, but until then, Chinese food was more grain based with historians calling this ‘the period of five grains.’ These grains included soybeans, wheat, two kinds of millet, as well as some rice. 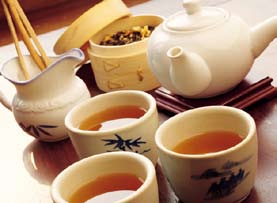 One other Chinese addition to any meal is tea. Falling into the Taoism category of “healing powers,” historically, they used tea medicinally. It’s the national drink of China, and in the past it was even used as a state currency in the form of pressed bricks. Anyone who has tried to determine a tea flavor quickly knows it’s not easy since there are reportedly thousands of varieties to choose from, each falling into the family of red, green, or black. A popular black tea option is Oolong tea, while red teas include “Keemun,” the type used in British breakfast teas, and of course, the popular green, definitely known for its health attributes.

These days just about anybody anywhere can find a local Chinese restaurant in their hometown, even better it’s still healthy cuisine. Most often using poly-unsaturated oils, authentic Chinese food is never made with milk-fat ingredients, and you’ll usually only find a small amount of meat used as well. Popular in the past, Chinese meals remain popular today, so much so in fact, that many people believe this type of cuisine is the best diet around. 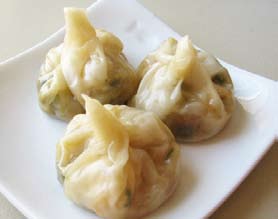 Directions:
Lightly beat the egg with the salt added and add 1/4 cup water. Sift the flour into a large bowl. Make a hole in the middle of the flour and add the egg and water mixture. Mix all together with the flour and add the remaining water to form the dough. Create balls and knead for about five minutes or until it is smooth and easy to work with then cover for 30 minutes. After about 30 minutes, turn the dough out onto a lightly floured surface and roll out until very thin. Cut into 3 1/2-inch squares and either use or store in a plastic bag in the refrigerator until ready. When ready to cook all you have to do is bake for 15 minutes at 350 degrees and you’re done. Recipe makes 24 wonton wrappers and will take about one hour.