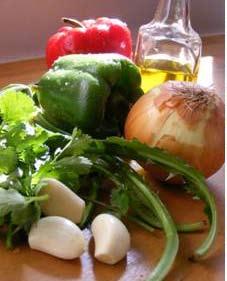 Food isn’t what people typically picture when they think of the Caribbean. But in Puerto Rico, where a storied history and rich culture come together to bring a unique taste of the tropics, Caribbean cuisine — called comida criolla by the locals — is all that’s on the mind, and mouth.

The evolution of Puerto Rican cuisine traces back through history, and celebrates its heritage with an amalgamation of diverse ingredients that learned to coexist and thrive together. The Taíno Indians, who settled the island long before Columbus, contributed seafood, tropical fruit, cassava, and corn to the native pantry. During their 400-year occupation, the Spanish imported meats, garlic, rice, and olive oil, among other essentials, while African slaves introduced okra, taro, and plantains.

This cultural blending has translated into many of the island’s dietary mainstays. Mofongo, the unofficial national dish of Puerto Rico, is a tasty, hearty mound of mashed plantain filled with vegetables, meat, or seafood. Spanish cuisine has retained strong roots on the island, with favorites like arroz con pollo (chicken with rice), bacalao (salted cod), and lechón (roast suckling pig) among Puerto Rico’s most popular dishes. Lesser known recipes like gandinga, (a stew made with pork tripe, kidneys, and liver) and mondongo were also handed down from slaves, who often made their meals from leftovers.

Comida criolla relies on local ingredients. The first, and ubiquitous, is the plantain. In addition to the mofongo, it can be served as a sweet, crispy side-dish (called amarillos) or a baked into a hard patty (known as tostones). Sofrito is another island specialty, a seasoned sauce that forms the base of many stews and soups. Puerto Ricans also make liberal use of achiote (annatto seeds) and adobo seasoning in their food.

The local cuisine caters to diverse palates, running the gamut from the greasiest deep-fried snacks to refined artistic creations.

For crispy goodies such as sorullitos (fried cornmeal snacks), alcapurrias (fritters made of taro or ground plantain), or empanadillas (turnovers), there are two must-visit destinations on the island. The most famous home of Puerto Rico’s fried bounty is a stretch of kiosks along Route 3, which runs from San Juan to Fajardo. Closer to the capital is Piñones, a rustic seaside community known for its collection of roadside snack-shacks and beachfront eateries.

The standard-bearer for authentic, down-home Puerto Rican cooking is La Casita Blanca — one of the most beloved restaurants on the island. La Casita Blanca is a rustic spot tucked into a quiet corner of the Santurce neighborhood of San Juan. Although the menu is limited, it’s a lunchtime favorite for many locals and changes are made daily to include entrees not easily found in other restaurants. 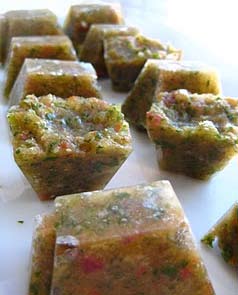 On the other side of the table is Chef Wilo Benet, a pioneer of creative new Puerto Rican cuisine. Using his comida criolla roots, Chef Wilo introduces an imaginative flair and whimsy to Puerto Rican food that can be best experienced at Pikayo, his flagship restaurant at the Conrad San Juan Condado Plaza Hotel. Another island trend that is becoming increasingly popular is the fusion of Puerto Rican and international flavors. In particular, the island has seen a happy marriage of Asian and Caribbean flavors, best executed in two San Juan restaurants: Dragonfly and Budatai.

Puerto Rico holds Comida criolla in such high regard that on April 9, 2010, it celebrated the third annual “Saborea Puerto Rico,” a weekend-long festival of comida criolla designed to promote the island as “The gastronomic capital of the Caribbean.” With a culinary tradition spanning a half century and incorporating flavors from around the world, it’s hard to argue the point.

This recipe comes from the late Doña Carmen Aboy de Valldejuli, a seminal figure in island cuisine and author of many comida criolla cookbooks.

In a small saucepan, heat the vegetable oil on high heat. Then reduce the heat, add the achiote and cook 5 minutes, stirring occasionally. Let cool completely and empty into a large pan, straining it through a colander with absorbent paper.

In a blender or food processor, blend the cooking ham, green peppers, ajíes dulces, onions, garlic, culantro, culantrillo and oregano, using all the liquid that they produce. Add to the pan and cook under high heat until it boils. Reduce the heat to medium and cook for 30 minutes, stirring occasionally.

Let the sauce cool completely and pour into an ice cube tray (2 tablespoons of the sauce per cube). Put the tray in the freezer. Once frozen, remove the cubes and keep them in sealable plastic bags and put them back in the freezer. Now you have your own sofrito stock, ready to add to any Comida Criolla recipe!