U.S. Citizen vs. American: What Is The Difference? 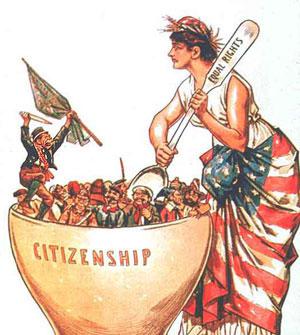 Since there is still so much racial discord in the United States, do you think there is a difference between being a “citizen of the United States” vs. being an “American” since being American connotes that one has been assimilated and been accepted as part of the “Melting Pot?”

We’ve all heard in the news and on the streets over the last several months, a call to take back America. It’s a call that more than hints that the label American only fits a certain set of people, and not necessarily those who have citizenship.

The distinction between who is American, and who is not, may be answered more by opinion than by a piece of paper. But why?

We asked a few professionals their thoughts on the matter.

Dr. Elizabeth Theiss-Morse, a political science professor at the University of Nebraska-Lincoln, published a book last year titled “Who counts as an American: The Boundaries of National Identity.”

She says the objective boundary that separates Americans from non-Americans is obviously citizenship. But in our lifetimes, we will only meet a small proportion of Americans. “We therefore are free to imagine who the American people are, and this is where stereotypes come into play. People hold a stereotype of an American, and those who do not fit the stereotype are not fully included in the group, ‘the American people.’”

Theiss-Morse says that in her research she found that those people who strongly identify as being American tend to believe that a true American is one who is native born, English speaking, and Christian.

“A third of the strong identifiers said that being white was important to being considered a true American,” adds Theiss-Morse. “My bottom line is that if you don‘t fit the stereotype of an American, you are marginalized, and not fully accepted as part of the American people.”

Donald Mazzella, editorial director of Information Strategies in New Jersey, says that as a child of immigrants, he uses the two phrases “American’ and “U.S. citizen”

“It means that I am an educated American who considers himself a citizen by birth and right,” he says. “Being an American is accepting this country’s culture, heritage, and responsibilities. In both cases, to earn that title required me to adopt, accept, and to a certain degree, conform.”

Antoinette Kurtz president of Strategies Literary Public Relations, and host of the Writer’s Roundtable Radio Show, says we are all lucky to be here. "We are a nation made up of immigrants, of spirited adventurers’ intent on finding a better life in a better place. That is our history and our legacy, as well as our past, present, and future strength. We are, and we continue to be, the land of the free, and the home of the brave.”

Kurtz adds that many seem reluctant today to become part of the melting pot. Many groups want to be part of a mosaic, and thereby that weakens the definition of what it is to be an American. “In the melting pot, we eventually all become part of the whole, while adding our own particular flavor to the mix,” she says. “In a mosaic, each piece stands clearly apart, the picture being fragmented upon close examination.”