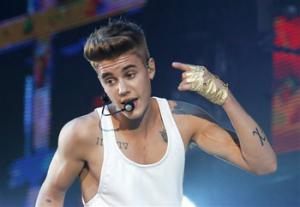 In this March 19, 2013, file photo, singer Justin Bieber performs during a concert at Bercy Arena in Paris. Bieber is apologizing after a years-old video surfaced showing the then-teenager telling a racist joke with the N-word. In a statement Sunday, June 1, 2014, to The Associated Press, Bieber said when he was a kid he didn't realize how certain words could hurt. Photo Credit: Francois Mori, File

Justin Bieber's use of the N-word shows insensitivity of racism among our young people, even some of our most famous. Bieber is apologizing after a years-old video surfaced showing the then-teenager telling a racist joke with the N-word.

In a statement Sunday to The Associated Press, Bieber said when he was a kid he didn't realize how certain words could hurt. He says he learned from his mistakes and apologized for them, and now is apologizing again because they have become public.

"I'm very sorry," Bieber said. "I take all my friendships with people of all cultures very seriously and I apologize for offending or hurting anyone with my childish and inexcusable behavior."

The British tabloid The Sun first published the video, which is five years old. In it, a then 15-year-old Bieber tells a joke about black people that has the racial epithet as the punchline. Before he says it, someone warns him not to – but he says it anyway amid laughter.

"I thought it was ok to repeat hurtful words and jokes, but I didn't realize at the time that it wasn't funny and that in fact my actions were continuing the ignorance," the statement said. "Thanks to friends and family I learned from my mistakes and grew up and apologized for those wrongs. Now that these mistakes from the past have become public I need to apologize again to all of those who I have offended."

It's the latest controversy for Bieber, who over the past couple of years has dealt with brushes with the law and other problems that have dealt a blow to his once wholesome image. The video was taken when Bieber was just emerging as a pop sensation.

In his statement, Bieber said that "ignorance has no place in our society and I hope the sharing of my faults can prevent others from making the same mistake in the future.

"I thought long and hard about what I wanted to say but telling the truth is always what's right."

He ends the statement by saying "Once again … I'm sorry."