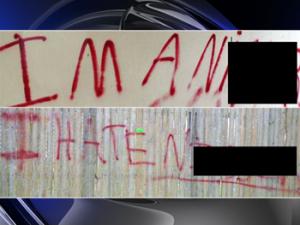 Painting racial slurs on a newly opened restaurant is yet another sign that racism is alive and well even among younger generations of Americans.

The St. Louis Post-Dispatch reports that Gregory M. Endsworth of St. John was charged with first-degree property damage after the owners of Mason's Chicken, Fish & More on St. Charles Rock Road discovered that someone had thrown a brick through the Breckenridge Hills restaurant's window and painted a racial slur on an outdoor sign within a week of its April opening.

Police say the vandal was caught on the restaurant's surveillance video. They identified Endsworth as the suspect by linking him to a pickup truck seen on camera.