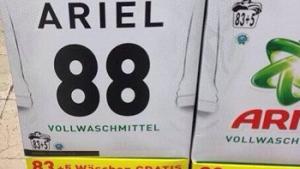 Detergent manufacturer Procter & Gamble has kicked up a froth in Germany after unintentionally placing a neo-Nazi code on promotional packages for Ariel washing powder. The number 88 stands for “Heil Hitler.” Photo Credit: shz.de

Codes representing Hitler and neo-Nazi slogans included on packaging for laundry detergent have caused outrage among shoppers in Germany.

Procter & Gamble has apologized for "any false connotations" after stirring anger in Germany for unintentionally placing a neo-Nazi code on promotional packages for its Ariel laundry detergent.

Outraged shoppers had posted pictures online of Ariel powder boxes featuring a white soccer jersey with a large number "88." The number is sensitive because far-right extremists in Germany often use it as a code to skirt a ban on the use of Nazi slogans in public: since "H'' is the eighth letter of the alphabet, "88" represents the phrase "Heil Hitler." Similarly, "18" is used to stand for "A.H." or Adolf Hitler. 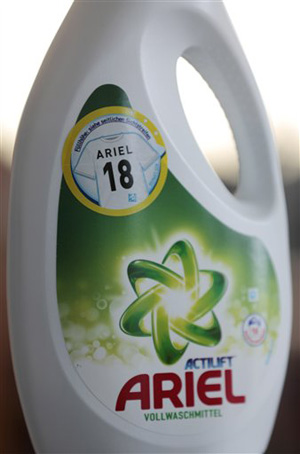 Procter & Gamble acknowledged Friday that the number was "unintentionally ambiguous."

"We very much regret if there are any false associations and distance ourselves clearly from any far-right ideology," company spokeswoman Gabi Hassig said in a statement. The number "88" was intended to show how many loads of laundry buyers would be able to do with one package.

Haessig said the company has stopped shipping the offending powder, as well as a liquid detergent that was being promoted as "Ariel 18." The number also represented the number of loads that could be done, the company said.