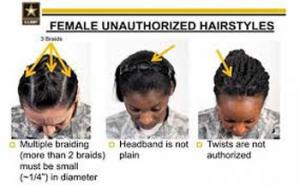 Is the U.S. Army discriminating against black women hairstyles with the issuance of new regulations regarding appearance of women soldiers?

New regulations meant to help standardize and professionalize soldiers' appearance, according to the Army, are now coming under criticism by some black military women, who say changes in the hair requirement are racially biased. Black military women are concerned that new Army hair regulations unfairly target them.

The Army earlier this week issued new appearance standards, which included bans on most twists, dreadlocks and large cornrows, all styles used predominantly by African-American women with natural hairstyles. More than 11,000 people have signed a White House petition asking President Barack Obama, the commander in chief, to have the military review the regulations to allow for "neat and maintained natural hairstyles." 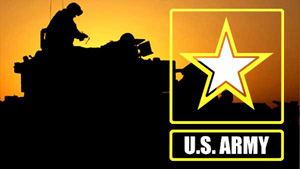 Some black military women, who make up about a third of the women in the armed forces, feel they have been singled out with these new regulations.

"I think that it primarily targets black women, and I'm not in agreement with it," said Patricia Jackson-Kelley of the National Association of Black Military Women. "I don't see how a woman wearing three braids in her hair, how that affects her ability to perform her duty in the military."

Even before the current controversy, the association had already planned to showcase the hairstyles of African-American women in the military throughout the years at its national convention in Phoenix in September.

Even though they are issuing new regulations for hair styles for women, i don't think that they would be discriminating against black females. The military is already strict in general and them telling women how to wear their hair doesn't seem unusual.