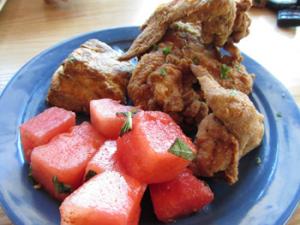 While fried chicken, watermelon and cornbread are enjoyed across ethnic groups, those foods have been used historically in a derogatory way toward Blacks. Photo Credit: labuonaforchetta.wordpress.com

The Black History month luncheon menu was found to be offensive even if the intent was well meaning. Perhaps if the lunch menu items were part of an extended program of education and enlightenment of the struggles and contribution of African-American during the history of America and the world, the response might have been different.

Officials at a Northern California private school are apologizing after a lunch menu option to celebrate Black History Month angered some parents and students with stereotypically ethnic foods.

Students at Carondelet High School for Girls in Concord wanted to come up with ways to observe the occasion during a lunchtime celebration Friday. But when the school announced a menu of fried chicken, cornbread and watermelon, other students and parents became offended.

KNTV-TV reports that school officials held an assembly Wednesday to discuss the issue and also sent a letter apologizing to parents. Principal Nancy Libby wrote that the items were taken off of the menu and that the school doesn't perpetrate racial stereotypes.

Libby also wrote the school will hold a diversity assembly.

There is a very fine line of being disrespectful during Black History month and honoring. People and schools need to be more careful about the things they are teaching and the activities they hold.

That is SO disrespectful! Whoever made this decision should really have their intentions questioned.

Where I am from we eat that all the time and we are white. I think they are making a bigger deal than what it really is. Do they find it racist when they eat Italian food? No. That is an average meal in the summer and it just happens to be a common thing to be disrespectful to a race. I do not think it was meant to be rude so I think it is being made a bigger deal than it really is.