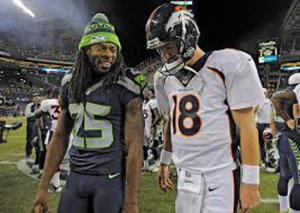 The racial stereotypes between Peyton Manning and Richard Sherman will share the stage with their performance as exceptional pro athletes during the Super Bowl. They have already begun. Photo Credit: forums.prosportsdaily.com

Racial stereotypes will be injected into the Super Bowl. You can see it coming with the inevitable comparisons between Peyton Manning and Richard Sherman. There are no better headlines: Good vs. evil; Humble vs. loudmouthed; The well-groomed quarterback vs. the cornerback with dreads. You can see, lurking just beneath the surface, the undeniable racial overtones.

We all love an enticing matchup - it doesn't get much better than one of the greatest QBs in NFL history taking on the best pass defender in the league with a title on the line - and inevitably will take sides.

But Manning and Sherman are both worth celebrating. Sure, they come from diverse backgrounds. Manning is the white son of privilege, an esteemed member of the NFL's first family along with father Archie and brother Eli. Sherman grew up in the hardscrabble African-American neighborhood of Compton, a guy who surely had more obstacles to overcome to live out his dreams.

Given Manning's lineage and position, it shouldn't be a surprise he would take a road to fame that's more in line with the league's corporate image - careful with his words, slowly but surely expanding his brand, finally feeling comfortable enough to display an endearing goofiness with appearances on "Saturday Night Live," that delightful "Football On Your Phone" commercial and the amusing Buick ad. He's the poster child for the NFL, for corporate America - and, by extension, white America.

"The NFL is a powerful force in our nation's cultural landscape precisely because it has done such an excellent job in monitoring and managing its image," said Jeff McCall, a professor of media studies at DePauw University in Indiana. "The NFL's marketing strategy is to keep the audience focused primarily on the game and the teams, and then allow the personalities of players and coaches to shine within that framework. This allows the game to stay popular even when charismatic players come and go." 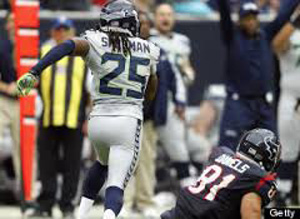 That said, it shouldn't be a surprise that Sherman - a dozen years younger than Manning - would take a different tack in his quest for fame, one that's very much as odds with the NFL's buttoned-down image. The cornerback may have graduated from Stanford with a degree in communications, but he was never going to be portrayed the same as Manning by the NFL's marketing machine, by the folks on Madison Avenue - and, by extension, white America.

So Sherman veered toward a more in-your-face approach, epitomized by his 20-second throwdown of an interview with Fox's Erin Andrews right after Seattle locked up the NFC championship thanks to his tipped pass in the end zone. His marketing methods may not be your cup of tea, but it has surely turned him into a household name and, in all likelihood, will lead to some off-the-field opportunities once the furor over his tasteless but ultimately harmless tirade fades away.

In fact, we'd love to see Sherman doing some good-natured trash-talking at Disney World if Seattle beats Manning's Denver Broncos in the Super Bowl. "When you try me with a sorry cartoon character like Mickey, that's the result you're going to get!" 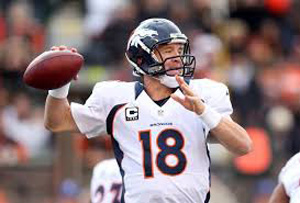 But seriously, while some criticism of Sherman's actions was to be expected - the choke sign was too much - and we won't even get into the blatant racism that broke out on Twitter in the aftermath of his brief interview, there is a troubling element in between those two extremes. There were hundreds, perhaps thousands, of references in the media - both traditional and social - to Sherman being a "thug," a word that certainly can be applied to any race but carries especially negative connotations when used to describe an African-American.

"On the one hand, I think you got the explicitly racist reaction, which is predictable in this age of Twitter," said George Ciccariello-Maher, a professor at Drexel University in Philadelphia who has studied racial issues. "What is more important is the coded language, those people who called him a thug."

For Ciccariello-Maher, the reaction to Sherman's comments is just an extension of the struggle that outspoken black athletes have been waging since heavyweight champion Jack Johnson dared to stand up the white establishment more than a century ago, a blatant double-standard that carried on through Muhammad Ali and Deion Sanders and anyone of color who dared speak their mind.

That, clearly, is still going strong today. "When Tom Brady goes on an expletive-laced tirade against the referees in November," the professor said, referring to another white quarterback with a stellar public image, "it's not a big deal."

In the end, both Manning and Sherman are superb football players with essentially the same goals who, viewed in their totality, come across as decent human beings. Their talents have them headed to the Super Bowl. Their contrasts have made them the headline. And they're both worthy of your admiration.

Paul Newberry is a national writer for The Associated Press. Follow Paul Newberry on Twitter or email him at pnewberry@ap.org .

I think it is articles and news like this that gets people thinking about the stereotypes and people just go along with them. I would of never compared these two the way this article did. News people blow things up to make them something big and something that people will notice and talk about. The Super Bowl is obviously a big thing people will talk about so the news will put things like this article up to get even more noticed by the public. One thing I agree with in this article is the fact that these two players are totally different not because of their skin colors but because of who they are. Manning is not the type of player to make a big scene, he keeps to himself and that might have to do with his age and experience in the the league. I don't know much about Sherman but he is younger and he will make mistakes just like Manning has in his career. But the stereotyping doesn't really come in until new articles and stations make a big deal out of the little things and the communities start talking.

Some people see him as a thug, but some people see him as a hero. I for one, appreciate his passion for the game and I got a feel for how hard he has been working to prove his doubters wrong. Sure, the fancy-shmancy upper-class white folk probably dislike him for his "ghetto" attitude, but on the other hand, there are probably just as many under-class African Americans living in the projects that dislike Manning for his "stuck-up" attitude. I have nothing against either one of the two, I'm just saying that because he has so many haters for something he did out of passion, he has just as many supporters that love him for it.

Some people see him as a thug, but some people see him as a hero. I for one, appreciate his passion for the game and I got a feel for how hard he has been working to prove his doubters wrong. Sure, the fancy-shmancy upper-class white folk probably dislike him for his "ghetto" attitude, but on the other hand, there are probably just as many under-class African Americans living in the projects that dislike Manning for his "stuck-up" attitude. I have nothing against either one of the two, I'm just saying that because he has so many haters for something he did out of passion, he has just as many supporters that love him for it.

I was actually offended by what he said in his interview. Yes, he grew up differently. Yes, he came from a different place than Manning. Just because he is different does not give him the right to be disrespectful. I understand also that this could be how you talk in the "ghetto" but national television is not that place. He could have said the same thing in a different tone and been so much better off. Also, just because Manning was privileged and his dad was an NFL player does not automatically mean that he will be the same. Things go both ways. Just because he is black is not an excuse to act that way. I know plenty of black athletes from the projects and they know when it is and is not okay to act like that. He went to Stanford, he obviously knows that he is smart enough to put up a facade.