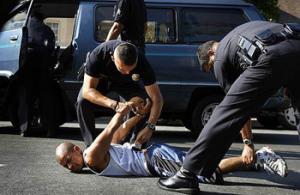 The second DOJ-funded study filed in court last week was conducted by John MacDonald, chair of the department of Criminology at the University of Pennsylvania. He found Latinos stopped by Johnson's deputies were 2.5 times more likely than drivers of other races to be issued a ticket and 1.5 times more likely to be arrested. MacDonald estimated a 1 in 1,000 chance such a racial disparity could occur randomly. Photo Credit: rooseveltcampusnetwork.org

The two analyses were filed in U.S. District Court last week as part of a federal civil rights complaint against Sheriff Terry S. Johnson. For their studies, Justice's experts reviewed citation and arrest records from 2008 through Oct. 2013, as well as direct observations by researchers of deputies pulling over drivers on the county's main roads.

Johnson, a Republican, has denied wrongdoing. He has claimed the federal lawsuit is politically motivated.

John Lamberth, retired chair of the Department of Psychology at Temple University, concluded that Johnson's deputies cited Latinos for violations at a rate more than six times higher than for whites. He said the statistical odds were far less than one in a million that such a sizable racial disparity could occur by chance.

"The observed disparities in … traffic enforcement are larger than any I have previously observed at a law enforcement agency in the United States," wrote Lamberth, who has testified as an expert in numerous court cases.

Johnson's lawyer, Chuck Kitchen of Raleigh, points to third study by a Duke University professor commissioned by the defense that concludes there is no solid evidence of racial profiling

First elected in 2002, Johnson has said he intends to campaign for another 4-year term in 2014. A trial in the case has been scheduled for July.

Johnson was an enthusiastic supporter of the 287(g) program began under President George W. Bush - and dismantled under President Barack Obama - that allowed local law enforcement officers to check the immigration status of those they encountered. Federal authorities alleged last year that Johnson and his deputies made unwarranted arrests of Latinos with the intent of maximizing deportations.

Hispanics make up about 11 percent of the population in Alamance County, about an hour's drive northwest of Raleigh.

The second DOJ-funded study filed in court last week was conducted by John MacDonald, chair of the department of Criminology at the University of Pennsylvania. He found Latinos stopped by Johnson's deputies were 2.5 times more likely than drivers of other races to be issued a ticket and 1.5 times more likely to be arrested. MacDonald estimated a 1 in 1,000 chance such a racial disparity could occur randomly.

MacDonald also concluded that Latinos are 20 percent more likely to have their cars searched for contraband, even though deputies were 85 percent less likely to find drugs than in vehicles driven by those of other races. 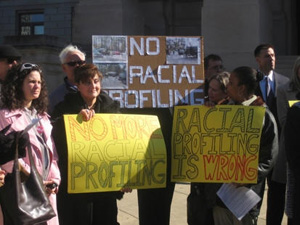 However, both researchers noted Johnson's deputies often ignored a state law requiring them to record the race of those arrested or given tickets. To get around this, the researchers used a U.S. Census Bureau list of family names of known Latino origin and compared those to the names of thise ticketed or arrested.

Working for the defense, Duke University statistics professor David Banks relied on the racial data provided by the sheriff's office. He said he found "no evidence of malfeasance" and that Latinos in Alamance were being cited for infractions at a lower rate than some other North Carolina counties he analyzed.

Banks did note Latinos accounted for 37 percent of those charged at license checkpoints operated by Alamance deputies, though they account for less than 12 percent of the county population. He suggested three reasons that could account for that disparity: Undocumented immigrants can't get driver's licenses; Latinos may be "more likely to commit certain kinds of offenses" leading to arrest; and Latinos tend to drive on roads or at times checkpoints are in operation.

"We believe that Professor Banks over at Duke has correctly analyzed the appropriate data, and it shows there is no racial profiling," said Kitchen, Johnson's lawyer.

According to the federal complaint, Johnson ordered special roadblocks in neighborhoods where Latinos live, and those with brown skin were stopped while whites were waved through, according to a summary of the federal investigation filed in court.

Raul Pinto, a lawyer for the American Civil Liberties Union of North Carolina, urged Johnson to reach a settlement with the Justice Department ensuring the civil rights of Latinos are protected.

"We've received complaints about Latino residents being targeted by Alamance deputies for years, but these numbers are truly shocking," Pinto said. "The experts' studies clearly affirm the complaints we've received from community members in Alamance County that the sheriff and his deputies unjustly target residents based on their race and ethnicity."

I can completely identify with this tactic by police. Hispanic racial profiling has always happened in my neighborhood. I am a light skinned Hispanic male so I have been fortunate to have been allowed by the system to pass through virtually untouched. My friends on the other hand look much darker and more Hispanic than I do and they are constantly stopped and always have been. When we are accused or harrassed by police all my friends look to me to explain what we are doing. I have had cops yell, curse and question me as to why I would hang around people like these... But, these are my people and I am no better or worse then they are! You wonder why some people are so hostile towards police officers it's because there are to many agendas! Police always have the same block aids out at the same places near the poorer neighborhoods. I'll tell you how you can prove it drive over to Irvine or Newport beach and tell me how many traffic stops you'll find... Here's a hint ZERO! But go to Santa Ana or Westminster where Hispanic populations are high and you'll run into dozens!!!