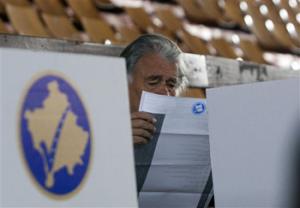 A Kosovo ethnic Albanian man looks at the ballot at a polling station in the Kosovo capital of Pristina before casting his vote Sunday, Nov 3, 2013. People in Kosovo are voting in a local election that will test the country's fragile relations with Serbia as both seek to move closer to the European Union. Serb participation in Kosovo's political life is a key element of an EU-brokered deal that seeks to settle the dispute over Kosovo and unlock EU funds. Photo Credit: The Associated Press, Visar Kryeziu

The Kosovo elections test ethnic relations with Serbia as hard-line Serbs in northern Kosovo intimidated would-be voters and were suspected of attacking a polling station during local elections Sunday. The actions underscored Kosovo's strained relations with Serbia, even as both states seek closer ties to the European Union.

It was the first time voters in all of Kosovo were choosing local councilors and mayors since the country seceded from Serbia in 2008.

The participation in the election of minority Serbs in Kosovo was being watched carefully. The integration of Serbs into Kosovar political life is a key element of an EU-brokered deal between Serbia and Kosovo that seeks to settle their disputes and unlock EU funds.

The Serb hard-liners' tactics, however, appeared to suppress voter turnout and raised concerns that Serbia had not fulfilled its pledge to stop fueling defiance among Serbs in Kosovo, especially in the north, where they dominate the population.

"Such acts will be met with swift response of the security mechanisms in an attempt to establish rule of law, a necessity in this part of the country," Jahjaga said in a statement.

The comments came after a group of some 30 masked men barged into the polling station in the late afternoon, smashing windows and tearing up voting material.

Associated Press footage showed police sealing off the area. It also showed members of the Organization for Security and Cooperation in Europe, which helped organize the vote in the north, leaving the polling station in their vehicles. The station was later closed.

Serbia's prime minister, Ivica Dacic, urged Serbs in Kosovo's north to defy the threats and the anti-election campaign and cast their ballots. He said participation in the election is in the interest of the Serb people in Kosovo. "Let us once do something that is in our interest and not in the interest of our enemies," Dacic said. "The fate of Serbs in Kosovo should be in their own hands, and not (Kosovo Prime Minister Hashim) Thaci's or the extremists'." 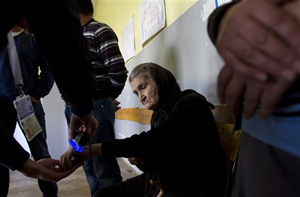 About 1.8 million voters are entitled to vote in 39 municipalities and elect mayors and local councilors. Voter turnout in Kosovo stood at 46 percent, excluding the Serb-dominated north, as polls closed at 1800GMT. An AP reporter witnessed Serbs crowding outside polling stations in the northern city of Mitrovica to discourage fellow Serbs from voting. Posters describing participation in elections as treason also have sprung up in Serb-majority areas.

Some Serbs fear the vote validates the secession of Kosovo, which declared independence from Serbia in 2008. The U.S. and the majority of the 28 EU countries recognize the new state, but Serbia rejects Kosovo's independence, as do many Serbs now living in Kosovo. "I can't vote in these elections. To me these are foreign elections," said Zeljko Vuckovic, a Serb resident of Mitrovica.

Another Serb, Radomir Milic, was one of the few voters who responded to Serbia's call to elect their leaders in an internationally backed process. "I vote for a better life because if we do not vote we cannot survive here," Milic said.

In the Serbian enclave of Gracanica and other areas in Kosovo where Serbs live surrounded by ethnic Albanians, who make up the majority of Kosovo's population, turnout reached a record high with voters waited in long lines to cast their ballots.

The exact population of Kosovo isn't clear partly because Serbs have in the past boycotted a census, but the World Bank and U.N. agencies usually estimate it to be around 2 million people.

For the ethnic Albanian majority, the vote tests the popularity of Thaci's governing party before next year's national elections. High-profile members of Thaci's Democratic Party of Kosovo have been targets of criminal investigations by the EU's justice mission in Kosovo.

"These are the first free elections that are organized in the entire territory of Kosovo," Thaci said after voting in a primary school in Pristina. "All citizens of Kosovo are participating. They are crucial for our future in Europe."