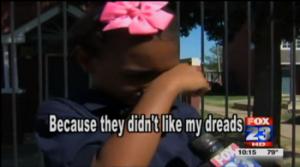 Elementary school student Tiana Parker cried when she was expelled from the a Tulsa school for wearing dreadlocks. Photo caption: newsone.com

Students at an elementary school from which a 7-year-old Oklahoma girl was pulled out of class and tearfully expelled for wearing dreadlocks and "not being presentable" has now changed its policy.

Though Tiana Parker has transferred to another school, authorities at Tulsa's Deborah Brown Community School now say they have amended their dress code and students will be allowed to wear "afro and dreadlocks" as long as there is no issue with hygiene.

Despite the change, Parker's parents insist their daughter will not be returning to the school. "That will not change the fact that our 7-year-old daughter was made to feel that was something wrong with her appearance, in turn coming home in tears," the family said in a statement.

Terrence Parker, Tiana's barber father, also took exception with the assertion his daughter didn't appear "presentable." He later added "I take pride in my kids looking nice. She went to the school last year and didn't have a problem."

Given the school's nearly total African-American body, Terrence Parker added he thought it was insulting that the school would take such a stance to begin with.

"I think they should let me have my dreads," a still shaken and tearful Tiana as she sat alongside her father. "They're mean." 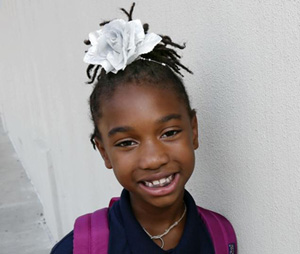 Terrence Parker thinks a few other factors were as work as well. "I've heard people say it's racist … but they're black," he said. "It's discrimination. This hurts my heart to the core."

The charter school's mission statement boasts their students are taught to take pride in their appearance and the curriculum prepares them for the real world and what they might encounter in the work world. Policy also states "hairstyles such as dreadlocks, afros, mohawks and other faddish styles are unacceptable" and the school feels they could "distract from the respectful and serious atmosphere it strives for."

Even in the face of the Parker family's bruised feelings and administrators at Langston University, which sponsors the school, agreeing that the policy should change, Deborah Brown officials remained largely unfazed.

"We've got bigger fish to fry in our community than talking about hairstyles," said school board member Harold Roberts. "There's a lot of energy that's been spent on a hairstyle in the last 10 days and it's ridiculous."

In a statement, school officials added "the parent of the student in question elected to choose a forbidden hairstyle which is detailed in the school policy. The parent was asked to change the hairstyle, however on Friday Aug. 30, the parent choose to dis-enroll her child from our program."

The incident marks at least the second time this summer a school has come under fire for banning certain hairstyles. In June, an Ohio school drew harsh criticism for banning students from wearing afro-puffs and smack twisted braids. In that instance, school officials also revoked the policy after a lingering backlash.

"They can have a weave, i.e white people hair styles," one critic wrote on the Deborah Brown Facebook page. "Meaning your child must go through painful and expensive hair alterations … rather than natural options … like an afro or dreads. Disgusting."