Another black man has been mistakenly killed by a police officer.

A former Florida A&M University football player was shot "at least 12 times" as he sought the assistance of officers following a crippling traffic accident.

Jonathan A. Ferrell, 24, died of multiple gunshot wounds earlier this month after running in the direction of arriving officers who had been called to the scene by neighbors whose doors he had knocked on pleading for help.

North Carolina Police now admit patrolman Randall Kerrick fired at least 12 times and used "excessive" force in shooting down the unarmed and unsuspecting former Florida A&M safety. Kerrick has now been charged with voluntary manslaughter after turning himself into police and has since been released on $50,000 bond. 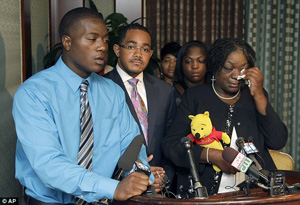 Court documents reveal officers initially reasoned Kerrick opened fire on the defenseless victim only after he continued running toward officers and even though at least one of the two cops accompanying him had already used a Taser on the victim to slow him down.

After at first classifying Kerrick’s actions as "appropriate and lawful" police, following an outcry of public outrage, have since released a statement asserting "the investigation of the shooting showed that the subsequent shooting was excessive and Kerrick did not have a lawful right to discharge his weapon."

Charlotte police later found a wrecked vehicle, believed to be Ferrell’s, near the crime scene and have since admitted the crash appears to have been so severe "Ferrell had to climb out of the back window just to escape it." 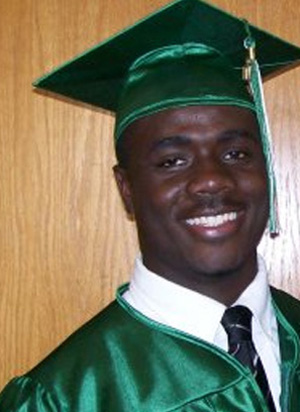 In North Carolina, a charge of voluntary manslaughter means the "killing without malice, but using excessive force in exercising an imperfect self-defense."

From Florida to North Carolina, those who knew Ferrell have bemoaned the tragedy while remembering the victim in the most glowing terms.

"Our hearts and prayers go out to his family during their time of bereavement," said FAMU athletic director Michael Smith, adding that Ferrell had only recently gotten engaged. "The university is deeply saddened."

Appearing alongside her attorney, Chris Chestnut, Georgia Ferrell said she forgives the man now charged with killing her son. "I pray for him … and I pray he gets off the police force. You took a piece of my heart I can never get back," she said.

In describing the accident, Mecklenburg police chief Robert Monroe said Ferrell was driving a vehicle that crashed into trees off a road in northeast Charlotte sometime after midnight, forcing him to walk several blocks in search of assistance.

Chestnut said Kerrick never identified himself as a police officer before opening fire on the defenseless victim, who family members say was working two jobs to support himself and his family.

"To shoot first and ask questions later is not an appropriate action for a police officer," said Chestnut.

The shooting marked at least the sixth one involving local officers since the start of 2012, four of them fatal. Charlotte police investigate their own officers in police-related shootings, and in most of the cases no charges were ultimately filed against officers.