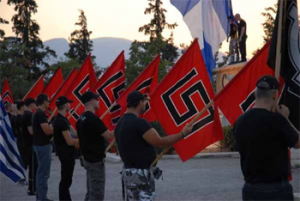 A member of the far-right Golden Dawn party has been arrested for the fatal stabbing of an anti-fascist activist. Photo Credit: thecommentator.com

Police raided the offices of Greece's far-right Golden Dawn party Wednesday after a man who said he is a party member was arrested in a fatal stabbing, the most serious instance of violence attributed to the extremist group so far.

Pavlos Fyssas, 34, a hip-hop singer identified by friends as an anti-fascist activist, died in a state hospital early Wednesday after being stabbed outside a cafe in the Keratsini area west of Athens. He suffered two stab wounds to the chest, authorities said.

A 45-year-old man arrested at the scene admitted attacking Fyssas, and to belonging to Golden Dawn, police said in a statement. A knife with traces of blood was found near his car.

The attack drew condemnation from across the political spectrum in Greece, and from abroad.

"Golden Dawn's openly xenophobic, neo-Nazi hatred even goes as far as murdering political opponents. This is shocking and intolerable by any standards, and more so in a European Union country," said Hannes Swoboda, an Austrian and president of the Socialists and Democrats Group in the European Parliament.

The suspect was to appear before a prosecutor later Wednesday. Anti-fascist groups were planning demonstrations in Athens and the northern city of Thessaloniki Wednesday evening.

At the scene, where blood still stained the sidewalk, friends of the victim and local residents left flowers and candles.

Golden Dawn, which denies it had any involvement in the stabbing, said party offices in the western city of Patras and on the island of Crete were attacked by groups of people wielding batons and throwing petrol bombs later in the day. It posted footage on its website showing riot police outside party offices.

The party, whose senior members have expressed admiration for Adolf Hitler although they deny being a neo-Nazi group, won nearly 7 percent of the vote in general elections last year. Recent opinion polls show its support has since risen to around 12 percent. 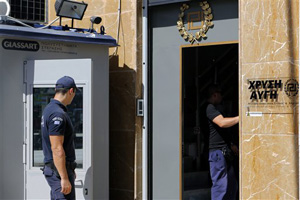 Golden Dawn members and supporters, often clearly identifiable in black T-shirts and combat trousers, have been blamed for numerous violent attacks, mostly severe beatings of dark-skinned migrants, in cities across the country. Its deputies have also frequently engaged in outbursts and name-calling in Parliament, most recently insulting Muslim members of Parliament as Turkish agents.

"I am shaken by the event," Public Order Minister Nikos Dendias said of Wednesday's attack. He said the killing and recent violent incidents involving the party, along with name-calling in Parliament, "shows in the clearest possible way the intentions of the neo-Nazi creation."

Five public prosecutors have been assigned to the case.

Police spokesman Christos Parthenis said the suspect arrived during an altercation between two groups of people and stabbed Fyssas. Friends of the victim told Greek media they had been attacked by a large group of men as they left the cafe.

Golden Dawn spokesman Ilias Kasidiaris, speaking before police announced the suspect had identified himself as a party member, described the stabbing as a "heinous crime" and denied any party involvement. Later, party lawmaker Michalis Avranitis said the victim and the suspect had initially argued about a soccer match.

"Yes, this man, as it turns out, has declared himself to be a member of Golden Dawn. But Golden Dawn has 1 million supporters. If in a restaurant, two drunken idiots have a fight and someone is stabbed, should we look at their ideology and blame that?" Avranitis said in Parliament.

Government spokesman Simos Kedikoglou called "on all political forces to raise a barrier to the vicious cycle of tension and violence. Democracy needs stability, cohesion and responsibility from all."