Bleach balloon bombs have been hurled at or dropped on or near black students attending the University of Texas at Austin. The incidents have occurred repeatedly. Photo Credit: zombieresearchsociety.com

University of Texas at Austin police are investigating an incident where a "bleach balloon" was hurled at a black student in a racially motivated attack callously aimed at "whitening" his skin.

Bryan Davis, a 21-year-old third year student at the university, told police he was he was walking to a friend's apartment not far from campus when someone dropped the believed to be chemically-filled weaponry from a nearby high-rise balcony, causing it to splatter about and land on his leg.

Harrowing as it may sound; the incident is not foreign to minority students around the Austin campus. At least four similar attacks were reported near school grounds last year, sparking massive student protests and national headlines.

"I kind of just hear something exploding near me and I feel a light sting on my leg," a still shaken Davis told local media. "People might look at it as a prank, but to be a minority at such a large school, even pranks like this, it doesn't come off the way you think it might; it was humiliating and it was embarrassing."

While Davis was not injured, even Austin Police Corporal David Boyd admitted the possibility of such a hideous end was definitely clear and present. "Bleach gets in your eyes and it could potentially blind you," he said. 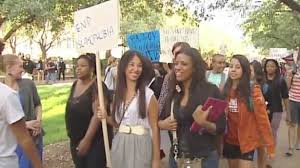 In a statement, university vice president of diversity and community engagement Gregory J. Vincent added "the Dean of Students and our campus climate response team, which coordinates the university's response to bias incidents, are actively reviewing these allegations and are also prepared to work with the Austin Police on their investigation."

Be that as it may, for Davis the scars still painfully linger. "I feel like a fool having had so much pride in front of others about the school I go to," he said. "Now I can't help but to feel embarrassed for both myself and the school for the reputation it's starting to get as being hostile towards blacks, Asians and other minorities."

All of last October's attacks took place near campus and targeted either black or Asian students. Beyond sparking campus-wide protests, it heightened racial tensions around the campus and throughout the city as never before, with some protestors charging many more episodes of such dastardly deeds take place but simply go unreported.

"I don't feel safe walking around by myself," said Davis. "I talked to my sister and she's a freshman at Xavier University; I always tease her about how she should come to UT, but when I was talking to her on the phone about it I was talking about why that was no longer a good idea for her physical safety. UT is supposed to have the atmosphere of the entire city, it's supposed to be progressive and forward-thinking, and here we are with hate crimes still taking place."

Corporal Boyd said investigators are now combing the area and viewing surrounding surveillance cameras in hopes of gathering more clues. Thus far no arrests have been made and authorities have no known suspects