Did Trayvon Martin Die Because of Racial Stereotypes About Black Boys? 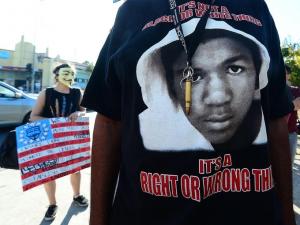 Tragically, Trayvon Martin loss his life because he looked like he fit the stereotype of how black boys and young black men are seen through the lens of white America. Photo Credit: usatoday.com

Did Trayvon Martin die because of racial stereotypes that continue to persist in the white community about black boys? On Friday, when President Obama reflected on the context surrounding the tragedy of Martin death, he reminded us of a number of stereotypes that come into play when black boys and young black men are encountered on streets, in department stores, and elevators all across America.

In making his remarks, President Barack Obama said, "I think it's important to recognize that the African- American community is looking at this issue through a set of experiences and a history that doesn't go away."

Obama spoke poignantly about the distrust that shadows many African-American men, saying that they can draw nervous stares on elevators and hear car locks clicking when they walk down the street.

"There are very few African-American men in this country who haven't had the experience of being followed when they were shopping in a department store," he said. "That includes me."

In many ways, it was the frank talk on what it can be like to be black in America that many African Americans had been waiting to hear from Obama.

A Florida jury last week acquitted George Zimmerman of all charges in the February 2012 shooting of Martin, who was an unarmed. The verdict was cheered by those who agreed that Zimmerman was acting in self-defense, while others protested the outcome, believing Zimmerman, who identifies himself as Hispanic, had targeted Martin because he was black.

Martin was staying in the gated community where Zimmerman lived and had gone out on a rainy evening last year to buy snacks at a store. Zimmerman, who was armed with a handgun and was part of a neighborhood watch organization, spotted Martin and called authorities to report he thought the teenager was acting suspiciously.

Against the advice of an emergency dispatcher, who said police were on their way, Zimmerman followed Martin and shot the teen when a scuffle or fight broke out.

Even as the president urged the public to accept the verdict, he gave voice to the feelings held by many angered by the jury's decisions.

There's a sense, Obama said, "that if a white male teen was involved in the same kind of scenario, that, from top to bottom, both the outcome and the aftermath might have been different."

The president also waded into the thorny debates on racial profiling and Florida's "Stand Your Ground" law, despite the fact that neither was formally raised during Zimmerman's trial. The law, and similar ones in other states, gives people wide latitude to use deadly force if they fear death or bodily harm.

Obama said it would be useful "to examine some state and local laws to see if they are designed in such a way that they may encourage the kinds of confrontation" that led to Martin's death.

And he raised the provocative question of whether Martin himself, if he had been armed and of age, "could he have stood his ground on that sidewalk" and shot Zimmerman if he felt threatened when being followed.

He said race relations are, however, getting better.

Addressing racial labels and stereotypes, and discriminatory practices in our justice system much be a central part in taking steps to become a more perfect union.