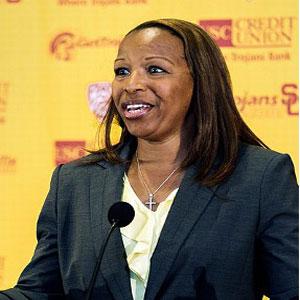 Someone overcoming both the racial and gender barrier in college sports is Cynthia Cooper-Dyke, inducted into the Naismith Hall of Fame as a player in 2010, and took over as the coach at the University of California, her alma mater in Los Angeles, where she grew up. "I have such an immense level of passion when it comes to growing women's basketball, and I love this program. I grew up as a player and a woman at USC. It opened doors for me." Photo Credit: AP

A new study gives college sports a B grade for racial and gender hiring practices, though the overall numbers have dipped slightly from last year.

The University of Central Florida’s Institute for Diversity and Ethics in Sport issued the 2012 College Sport Racial and Gender Report Card on July 10, 2013. The mark for gender hiring rose slightly to 81.3 points from 80.7 a year ago, while the number for racial hiring dipped to 81 points from 82.2. The overall score fell to 81.1 points from 81.5.

Among all professional and college sports covered by the study's report cards, college sports earned the lowest grade for racial hiring practices, only ahead of only the NFL and Major League Baseball in gender hiring.

"As someone who worked at the college level for years, it's disappointing to me that the colleges are still worse than the pros in racial hiring practices and in many cases, gender hiring practices," said Richard Lapchick, one of the study's authors. "My hope is that things would continue to improve, but the numbers actually declined a little this year."

The study showed areas of improvement but pointed out concerns. The proportion of African-American men's basketball coaches in Division I dipped to 18.6 percent, down from a high of 25.2 percent in 2005-06. It's also the lowest mark since the 1995-96 season.

Lapchick said the downward trend in diversity for men's basketball is another reminder that colleges and conferences need to be diligent about diverse hiring. He said college sports should have a standard similar to the NFL's Rooney Rule to promote diversity in the hiring process.

"Scrutiny is an incentive for schools to have a diverse process, and when that happens, there's a better chance that a school will make a diverse hire," Lapchick said.

Lapchick said there are reasons to be encouraged, including well-publicized recent gains in football and women's basketball head coaching positions.

There were 18 minority head football coaches last season out of 120 Division I schools, which was the same number as a year ago.

In women's Division I basketball, 47.9 percent of all players are African-American.

But the study also noted problems - especially in administration.

"It's another area where we need scrutiny," Lapchick said. "It's why every year we publish a leadership study. Presidents, commissioners, and athletic directors make decisions that have impact."