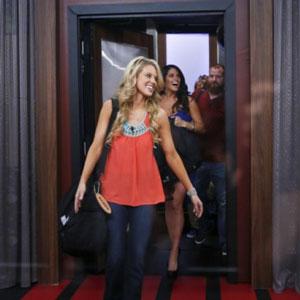 As season 15 kicked off in late June, the contestants looked forward to the possibility of becoming the next winner of Big Brother. Instead, at least two of them have lost their real life jobs because of the racist comments they chose to make on the show. Photo Credit: bigbrotheraccess.com

Apparently, you have to be very careful about who you invite to your home.

In one example of the insidiousness of racism, and why it’s so hard to get rid of, several houseguests on the CBS-TV reality show “Big Brother,” are caught spewing racist remarks on the live feed of the popular television show.

The live feed is an Internet-based 24/7 subscription feed that gives fans access to the Big Brother house at any time of the day or night.

According to realityblurred.com, contestant GinaMarie Zimmerman allegedly referred to government assistance as “n____ insurance.” Someone else on the show said an Asian contestant was no better than a servant, “serving rice” to her fellow houseguests. And homophobic comments were also allegedly made about Andy, a gay contestant, by contestant Aaryan Gries. She allegedly called him a “queer.” Other male contestants reportedly made unflattering comments about Andy.

CBS is furiously trying to divorce itself from those remarks. In a statement, the network noted that the show’s premise is that contestants never have any privacy and that sometimes in unguarded moments people say inappropriate things.

“We certainly find the statements made by several of the houseguests on the live Internet feed to be offensive,” the network said.

The hammer already fell on the two women with Zimmerman fired from her job as a beauty pageant coordinator because of her language. “We are actually thankful that this show let us see GinaMarie for who she truly is as we would never want her to be a role model to our future contestants," East Coast USA Pageant CEO Lauren Handler said. And Gries was dropped by Zephyr Talent, her modeling agency.

Racism, homophobia, ethnic slurs…no matter how they are couched, these comments reveal the difficulty inherent in trying to stamp out the disparaging way some people think about others. Such remarks lead to stereotyping people, which provides the soil required for racism to thrive. Some people rant about how “political correctness” has gone too far. However, when it comes to speaking respectfully of others, it can never go far enough.