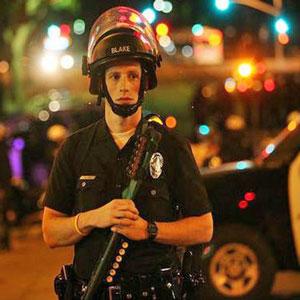 In early May, as many as 79 LAPD officers in riot gear stormed a house filled with black and Hispanic USC students celebrating the end of the school year. Earlier that same night police also went to a house across the street where white students were also celebrating, but they did not arrest or allegedly harm anyone in that incident. Photo Credit: LAPD/Ted Soqui/LA Weekly

Pictures, videos, and tweets from the incident landed on YouTube and traumatized students demand answers for what they describe as blatant acts of racial profiling and excessive use of force. The raids ended with six students arrested and several others roughed up, threatened, and later detained.

Black students told the L.A. Times that earlier that evening some of the same officers responded to a similar gathering hosted by white students directly across the street from their event, yet, in that instance, no arrests were made, and the students involved received much greater levels of respect.

The LAPD has now opened an internal investigation of its handling of the incident, but a department spokesperson continues to defend the actions of arriving officers by contending they felt threatened and were pelted with flying debris.

Hours later, outraged students packed a campus auditorium for a heated discussion about the LAPD and campus security, black student party organizer and USC senior Nate Howard, explained students felt further disrespected that there hadn’t “been a message from USC president Max Nikias regarding the well-being of the students taken into custody.”

“We will continue to press this issue and hold president Nikias responsible for what happened to USC students," he said.

Howard told the Times he decided to organize the party a day before and instantly went through the proper channels in registering it with the university’s public safety department. On the night in question, Howard said officers begin arriving at his home around 2 a.m. and immediately ordered him to turn down the music and shut down the party.

“We did… but I guess we weren’t moving fast enough, because they came back with more than 70 officers in full riot gear, batons, and flashlights,” he said. Howard added he was among those searched, handcuffed, and ultimately detained for hours.

"They began to move students out with excessive force — students were handcuffed and arrested, people were physically harmed and pushed," said Howard. "LAPD made it seem like I was resisting, when I wasn't. They kept saying 'stop resisting, stop resisting.'"

Allegations of racial slurs being shouted have now also surfaced, prompting USC student leader Rikiesha Pierce to remind students during their campus rally, “We are not powerless. I say this is our school and we demand answers.”

Meanwhile, the LAPD is sticking with its story that officers were the first ones attacked. “It was a party that got out of control,” insisted Lt. Andy Neiman. Student and YouTube video-maker Lamar Gray agrees things quickly went awry.

“People were traumatized and scared,” he said. "This is much bigger than the police, much bigger than USC, this is about the power of social media as a tool to keep institutions accountable for what they say and do.”