Institutional Racism At The State Department? 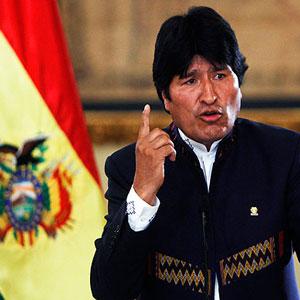 Bolivian President Evo Morales said “Bolivia's government will study the possible departure (expulsion) of the U.S. Embassy and its Agency for International Development.” He said the times of Bolivia needing the U.S. Embassy’s endorcement on “who would be the new commander of the Armed Forces, Police, and Government Ministers is over.” Photo Credit: boliviaexigesumar.blogspot.com

On May 1, Bolivian President Evo Morales kicked out the U.S. Agency for International Development (USAID) in "protest" after U.S. Secretary of State John Kerry referred to Latin America as the United States' "backyard." Kerry made the statement at a mid-April Senate Foreign Relations Committee meeting in Washington.

Kerry said the dynamics of the Western hemisphere needed to improve because relations within the Americas have "too often been viewed as a second thought. It shouldn't be. It's our backyard neighborhood, as you say," Kerry said.

Morales said it is "humiliating and offensive" that the U.S. denominated Latin America as its backyard.

"We cannot accept these offensive statements by the Secretary of State of the United States (...) When you say 'backyard,' are we your trash dump? I say it is contempt, a hatred of Latin Americans," the Bolivian president said in a press conference.

Using the word “backyard” to describe Latin America is not new in the U.S. but usually goes unnoticed to the point of being second nature. But it is an insult to those countries who view it as a form of institutional racism since the U.S. has a history of considering the people in the region as second-class citizens. The term also evokes strong emotions in a region with several U.S.-backed coups.

But Kerry may have a defense for his statements. In February, Kerry defended freedom of speech and thought even by hate groups in the United States, telling German students that in America "you have a right to be stupid if you want to be."