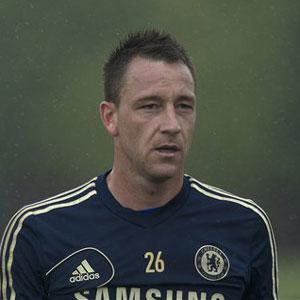 Chelsea's John Terry walks from the pitch after taking part in a training session at the team's training ground in Cobham, England, Thursday, May 9, 2013. Chelsea is holding a media day ahead of their Europa League Cup soccer final in Amsterdam against Benfica on May 15. Photo Credit: APAlastair Grant

LONDON (AP) - The English Football Association is due to vote this week to introduce minimum five-game bans for racial abuse.

The sanction will rise if there are aggravating circumstances, people familiar with the situation told The Associated Press about the proposal, which is in response to concerns about a resurgence of racism in the English game.

The people spoke on condition of anonymity because they were not authorized to discuss the details ahead of the vote at the FA annual general meeting on Thursday.

FA chairman David Bernstein confirmed last week that the organization is preparing to present new anti-racism measures, while stating it wouldn't back proposals by the Union of European Football Associations for a 10-game minimum racism ban for abuse.

"We don't have to follow UEFA," Bernstein said. "Ours is a very detailed and thought-out proposal. It is not likely to be exactly in line with UEFA's. Ours will have a minimum, but it will have a clear acceleration from that minimum. We may well yet go beyond the 10 (ultimately)."

The FA leadership has been under pressure to introduce tougher and clearer sanctions. In the past two years, Liverpool forward Luis Suarez and Chelsea captain John Terry have been banned for racial abuse. Suarez was suspended for eight games, while Terry received half that punishment.

The minimum ban will apply to people found guilty by the FA of any form of discrimination. But anti-racism campaigners believe the FA should fall in line with UEFA's plans. At its congress in London next week, European soccer's governing body will ask its 53 members to adopt the 10-game suspension.

Herman Ouseley, chairman of English soccer anti-racism group Kick It Out, is calling for stronger deterrents.

"If UEFA are prepared to go with 10 - let's go with 10 (in England)," Ouseley told the AP. "We will look stupid if UEFA goes with 10 and we go with 5. It will not add any credibility to the FA's stance that it has zero tolerance on this matter. I think it's very important they build credibility and send out a very confident message that will make people feel they can complain and something will be done."