Most Americans Support Use of Redskins 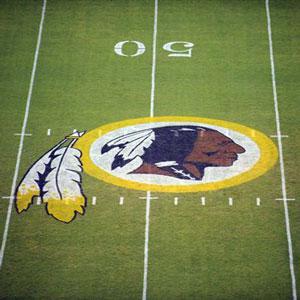 In this Aug. 28, 2009, file photo, the Washington Redskins logo is displayed at midfield before the start of a preseason NFL football game in Landover, Md. The team's nickname, which some consider a derogatory term for Native Americans, has faced a barrage of criticism. But a new Associated Press-GfK poll shows that nationally, “Redskins” still enjoys widespread support. Photo Credit: AP/Nick Wass

Despite the objection expressed by Native Americans, of the use of sacred names from their history and culture as nicknames and mascots for team sports, most Americans still support the use of names like “Redskins,” according to a recent poll conducted by the Associated Press.

The team's nickname has faced a new barrage of criticism for being offensive to Native Americans. Local leaders and pundits have called for a name change. Opponents have launched a legal challenge intended to deny the team federal trademark protection. A bill introduced in Congress in March would do the same, though it appears unlikely to pass.

But a new Associated Press-GfK poll shows that nationally, "Redskins" still enjoys widespread support. Nearly four in five Americans don't think the team should change its name, the survey found. Only 11 percent think it should be changed, while 8 percent weren't sure and 2 percent didn't answer.

Although 79 percent favor keeping the name, that does represent a 10 percentage point drop from the last national poll on the subject, conducted in 1992 by The Washington Post and ABC News just before the team won its most recent Super Bowl.

The AP-GfK poll was conducted from April 11-15. It included interviews with 1,004 adults on both landlines and cell phones. It has a margin of sampling error of plus or minus 3.9 percentage points.

Several poll respondents told The AP that they did not consider the name offensive and cited tradition in arguing that it shouldn't change.

"That's who they've been forever. That's who they're known as," said Sarah Lee, a 36-year-old stay-at-home mom from Osceola, Ind. "I think we as a people make race out to be a bigger issue than it is."

But those who think the name should be changed say the word is obviously derogatory.

"With everything that Native Americans have gone through in this country, to have a sports team named the Redskins - come on, now. It's bad," said Pamela Rogal, 56, a writer from Boston. "Much farther down the road, we're going to look back on this and say, 'Are you serious? Did they really call them the Washington Redskins?' It's a no-brainer."

A Redskins spokesman declined to comment on the poll's findings or to make team executives available for interviews.

In Washington, debate over the name increased in recent months. In February, the National Museum of the American Indian held a daylong symposium on the use of Indian mascots by sports teams. Museum Director Kevin Gover, of the Pawnee Nation, said the word "redskin" was "the equivalent of the n-word."

District of Columbia Mayor Vincent Gray, a Democrat, suggested that the team would have to consider changing the name if it wanted to play its home games in the city again. Delegate Eleanor Holmes Norton, a Democrat who represents the district in Congress, said she's a fan of the team but avoids saying "Redskins." Just this week, a D.C. councilmember introduced a resolution calling for a name change, and it appears to have enough support to pass, although the council has no power over the team. 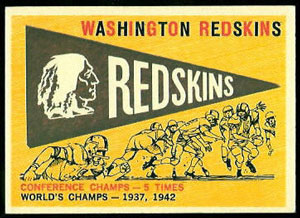 "We need to get rid of it," said longtime local news anchor Jim Vance in a commentary that aired in February. Vance, of WRC-TV, revealed that he has avoided using the name on the air for the past few years.

Other media outlets have done the same. The Washington City Paper substitutes the name "Pigskins," and DCist.com announced in February that it would avoid using the name in print. The Kansas City Star also has a policy against printing "Redskins."

In March, a three-judge panel heard arguments from a group of five Native American petitioners that the team shouldn't have federal trademark protection, which could force owner Daniel Snyder into a change by weakening him financially. A decision isn't expected for up to a year, and the Redskins are sure to appeal if it doesn't go their way. A similar case, ultimately won by the team, was filed in 1992 and needed 17 years to go through the legal system before the Supreme Court declined to intervene.

Susan Shown Harjo, a plaintiff in that case, said the poll results were "irrelevant" because popular opinion shouldn't decide the issue.

"This is a really good example of why you never put racism up to a popular vote, because racism will win every time," she said. "It's not up to the offending class to say what offends the offended."

Several poll respondents told AP that they were unaware of the ongoing debate.

"If we're going to say that 'Redskins' is an offensive term, like the n-word or something like that, I haven't heard that," said David Black, 38, a football fan from Edmond, Okla., who doesn't think a change is necessary.

George Strange, 52, of Jacksonville, Fla., who feels the name should change, said people might change their minds if they become more educated about the word and its history.

"My opinion, as I've gotten older, has changed. When I was younger, it was not a big deal. I can't get past the fact that it's a racial slur," Strange said. "I do have friends that are Redskins fans and ... they can't step aside and just look at it from a different perspective."

There's precedent for a Washington team changing its name because of cultural sensitivities. The late Washington Bullets owner Abe Pollin decided the nickname was inappropriate because of its association with urban violence, and in 1997, the NBA team was rechristened the Wizards.

Other professional sports teams have Native American nicknames, including the NFL's Kansas City Chiefs and baseball's Atlanta Braves and Cleveland Indians. But former U.S. Sen. Ben Nighthorse Campbell of Colorado, who is Native American, said "Redskins" is much worse because of its origins and its use in connection with bounties on Indians. 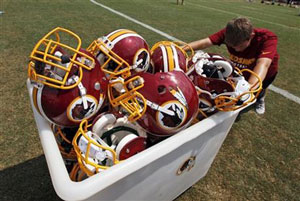 "There's a derogatory name for every ethnic group in America, and we shouldn't be using those words," Campbell said, adding that many people don't realize how offensive the word is. "We probably haven't gotten our message out as well as it should be gotten out."

American Indians make up 1 percent of the population, according to Census figures.

Numerous colleges and universities have changed names that reference Native Americans. St. John's changed its mascot from the Redmen to the Red Storm, Marquette is now the Golden Eagles instead of the Warriors and Stanford switched from the Indians to the Cardinal.

Synder, however, has been adamant that the name should not change, and NFL Commissioner Roger Goodell said he supports the team's stance. General Manager Bruce Allen said in March that the team isn't considering a new name.

Following the symposium at the museum, the team posted a series of articles on its official website that spotlighted some of the 70 U.S. high schools that use the nickname Redskins.

"There is nothing that we feel is offensive," Allen said. "And we're proud of our history."

Online: The questions and answers from the poll: http://www.ap-gfkpoll.com