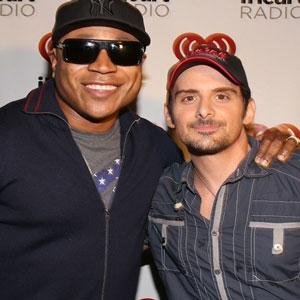 Brad Paisley and L.L. Cool J. partnered in a bizarre musical experiment that, though it was supposedly intended to ease race relations in America, is, instead, producing an online backlash of epic proportions. Photo Credit: policymic.com

Music has long been celebrated as a language all of its own. Nonetheless, industry trendsetters LL Cool J. and Brad Paisley are being taking to task for what critics blast as their naïve lyrics on the issue of race relations.

Conceptually ambitious by current industry standards, critics, ranging from The Roots’ Questlove, to comedian Patton Oswalt, nonetheless instantly took to Twitter this week to lambast the duo’s simplistic take on such a complex matter as race relations, as well as chastise them over the false comparisons they so rhythmically trumpet as truisms.

"Just heard the "Accidental Racist" man that Weird Al (Yankovic) is amazing," Questlove tweeted of the yesteryear parodist known for infamously spoofing such classic tunes as Michael Jackson’s “Beat It” and Lady Gaga’s “Born This Way.”

He later added, reaction to it should rival all the backlash raised by the recent Rick Ross tune in which some charged he was glorifying the act of date rape. “I expect "Accidental Racist" to get equal amounts of discussion and dialogue," he wrote.

Mission accomplished. Earlier this week, songwriter Paisley, on whose new “Wheelhouse” album the collaboration can be heard, took to the airwaves to defend its lyrics and intended message.

"I felt like when we were writing this song, it wasn't necessarily up to the media and I don't really trust Hollywood ... or talk radio or anything like that to sort of deal with that anymore,” Paisley told Ellen DeGeneres during an airing of her show this week. “I think it’s music’s turn to have the conversation."

But just how substantive can any talks be when the crux of the conversation centers on such a suspect theme of generalities?

“If you don't judge my gold chains, I'll forget the iron chains.., just because my pants are sagging doesn’t mean I’m up to no good. If you don’t judge my do-rag I won’t judge your red flag,” LL opines throughout the song.

With that, the effort, quite offensively, I might add, does as much harm as the good it purports to strive for, sophomorically advancing the crude stereotype that far more than the five or so percent of blacks who chose to present themselves in such ways even exist.

“Let bygone be bygones,” a call and response interaction by the artists implore us as its beats build to a crescendo. But how are we do that when, as even LL concedes, so much of “the relationship between the Mason-Dixon needs fixin.” So much of what was wrong back then still remains wrong now.

The LL Cool J’s of the world remain roughly ten times as likely to be unemployed and incarcerated as the Brad Paisleys. Now that’s a tune we’d all be better served to engage ourselves with.

I think that LL and Brad have the right idea when it comes to racism. Instead of pretending that racism and stereotypes don’t exist, we need to bring them out into the light. Awareness is one of the many keys that are needed to end racism. It’s like ‘out of sight, out of mind.’ It’s easy to forget that things exist when we aren’t forced to deal with them. However, hiding something does not make it go away. I would say that it only makes the problem worse. Music is very powerful. I can’t think of a single person who doesn’t listen to some type of music. Making a statement through music is smart because it is almost guaranteed to reach a huge audience. These stereotypes are already widespread throughout America; they have survived from generation to generation. Ignoring them hasn't caused them to go away, so I am all for trying something new.

I like what LL Cool J and Brad Praisley are doing, I think it's best that someone say what's going on. As it stands now, most people think that racism and discrimination are over, and that's not the case. I think that using music as a medium for what's really going on is an excellent idea because it reaches pretty much everyone. I really love LL's lyrics that they show here... it brings out stereotypes that everyone thinks about.

I really enjoy this song by Brad Paisley and LL Cool J. It addresses issues that the media does not take the time to address. So many people believe that racism no longer exists and this song proves that this is not the case. By making references to their own life and culture, Paisley and LL Cool J are using daily examples to show how prominent this issue is in society. I give both men a lot of credit for being able to openly talk about the racist thoughts and stereotypes that they personally experience. I also really enjoy how LL Cool J addresses that he makes judgments about the white population. Members of the white community have always been openly racist, there is no one that can deny that; however, there are also people from other races that judge and stereotype people who are different and that is never addressed. It is important for society to realize that racism is no longer one sided. It is no longer just the white community that is being openly racist. Every race, every religion, and every culture is stereotyping and judging people who are in a “different group.” I think that is why this song is causing so much controversy. People want to believe that racism is a thing of the past, but hearing two respected artists sing about it, makes them realize that it is not. Brad Paisley and LL Cool J have a lot of power in society and using that power to reach out to their fans and address this issue gives hope that younger generations will get the message and maybe racism can one day be a thing of the past.

I can see where the idea of the song has stemmed from, but I do not quite understand what the message is supposed to be. I feel that from this song, and in watching an interview on ABC news of LL Cool J and Brad Paisley together, they allude to racism not existing anymore. I don't think this does any good for anybody, because I think that Americans who do not believe that race plays an effect on a person's life will hear and see the things that they say, and reinforce the thinking they have already. I don't want to talk about the song lyrics particularly because I think lyrics can mean so many different things that it would be hard to decide what means what and what is just supposed to sound good. At one point of the interview, Paisley says in a tone that is unappealing to me " White Americans are still paying for mistakes that a bunch of folks made before we came.". I was appalled at this statement, because saying this is the same as saying Black Americans aren't suffering and aren't disadvantaged. I can see how this could be good in some way, but the way that these two went about the song did not do anything but make people upset in my opinion.

I think this song is very problematic. I have listened to the entire thing, and I think it just makes it look like racism is no longer a problem. It says, "Let's not judge each other and just be friends," without bothering to look at the underlying social and institutional problems that create racism and encourage us to judge each other based on our racial identities. It calls on people to forget the past and ignore the way it affects the present. It mentions "the new south," where racism no longer happens. As a matter of fact, racism occurs every day in the north, in the south, and in the rest of the world.

I don't know my family lineage, but I'd like to believe my family didn't own slaves or profit from the slave trade (directly or indirectly), but that is probably not true. Whether or not my family or I ever did directly contribute to the practice, it is still my responsibility to do whatever small things I can to dismantle systems of privilege and oppression. I didn't have to be part of the problem to accept responsibility for coming up with a solution.

We don't have to be enslaving people in literal chains to continue to oppress them. This song really advocates color-blind racism (Bonilla-Silva) in the front stage (Feagin and Picca), and it does not address back stage racism (Feagin and Picca) or institutionalized racism at all.