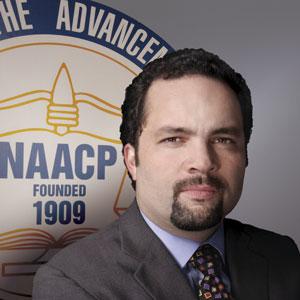 NAACP president Benjamin Jealous is pressing for new laws to rein in a practice he says amounts to racial injustice on a massive scale. Photo Credit: naacp.org

Ending the NYPD stop and frisk policy is a national priority.

NEW YORK (AP) - Ending the New York Police Department's extensive use of stop and frisk is a top goal for the nation's oldest civil rights organization, NAACP President Benjamin Jealous said Tuesday in pressing for new laws to rein in a practice he said amounted to racial injustice on a massive scale.

"Stop and frisk is the largest local racial profiling program in the country," Jealous said at a rally outside New York's City Hall. "Shutting it down is a national priority for the NAACP."

The NYPD has made 5 million of the stops in the past decade, fueling a debate that has reached what could prove a pivotal moment this year. While the City Council weighs proposals to create new rules for the stops and new oversight for the NYPD, a civil rights trial over the tactic is unfolding in federal court.

Tuesday's demonstration was designed to keep up momentum toward passing new stop and frisk laws after City Council Speaker Christine Quinn agreed last month to support a related proposal: a plan to create an inspector general for the police. That plan, which has yet to crystallize into legislation, grew out of concerns about both stop and frisk and the department's widespread surveillance of Muslims, as disclosed in a series of stories by The Associated Press.

Civil rights leaders, city lawmakers, Muslim advocates, and others at the rally stressed that they wanted to make sure reform didn't stop with an inspector general.

"We've come a long way with the inspector general bill but it's also crucial to pass the others,” City Councilman Jumaane Williams said.

Proponents are focusing on a measure that would give people more latitude to sue if they believed officers stopped them because of their race, an idea critics say would open the floodgates to litigation. Other provisions would require officers making stops to explain why and give their names. 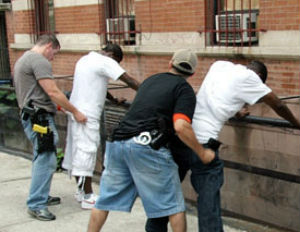 Quinn said she was continuing to negotiate with the advocates over the measures.

The Supreme Court has said it's legal for police to stop, question, and sometimes pat down people they believe are acting suspiciously, but who may not meet the probable-cause standard for an arrest. The federal trial seeks broad changes in how the NYPD can use the tactic.

Critics say it harasses innocent people and reflects racial profiling. More than 80 percent of those stopped are black or Hispanic.

The NYPD and Mayor Michael Bloomberg have said stop and frisk helps drive down crime and violence, and the stops are based on valid suspicions, not racial profiling.

"Nobody likes to get stopped," Bloomberg said last week, but "if it's a question of stopping and annoying you or saving your life, I know which one we're going to do."

After years of being something of a side issue in city politics, stop and frisk has gained profile in the last year from the court case, some prominent protests, and the political dynamics surrounding this year's mayoral race.