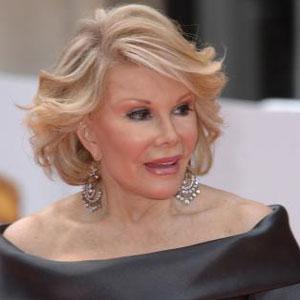 Did Joan Rivers make a racist comment, and if so, was she targeting whites or blacks? Photo Credit: cdn.ph.upi.com

It is a cringe-worthy statement, but what makes it sound so offensive?

An Internet search yielded almost no reaction to the statement that Joan Rivers tweeted about Justin Bieber. Earlier this year, Rivers called Bieber a “cute little lesbian” on Anderson Live and made a joke about his height. Although all of these remarks are offensive, Ms. River’s stock in trade are the outrageous insults, so it might be advisable to just consider the source and walk on by without taking the bait.

Only one blog, Answerology.com attempted to stir controversy on the reference by asking: “What do you think about Joan River's comment about Justin Bieber? ‘A white boy shouldn’t try and be a boy from the ghetto.’ Is that racist?” The question yielded 16 answers, with most saying it wasn’t racist.

“It is street talk and I don't think it has any color to speak of,” blogged a retired man. “No, it is a fact, nothing is more ridiculous than watching local affluent kids at the mall or big box store trying to act street,” responded a woman from Cincinnati.

“Well, when it comes to Bieber, she is so right! Further, it's not racist. It's stereotyping,” another woman wrote. A musician remarked, “The fact that someone could think that is racist is telling of their stereotypical way of looking at poverty, if you ask me.”

What do you think? Is this simply, as one commenter put it, “...it’s just a comment in which elements of race are mentioned...musically speaking.” Or, is it an accurate statement indicating that people of one race should not attempt to imitate those of another race?

Maybe it indicates that a rich white man is reducing himself by dressing in the same style as browned skin men who live in poverty. Now, that would be racist and classist as well.

Joan Rivers and the Answerology commentators might think that Joan's comments were funny but the humor is denigrating and points out classism and the inferiority of females. Even if Justin Bieber might look androgynous or effeminately androgynous at times. There is even a Tumblr dedicated to this observation: http://lesbianswholooklikejustinbieber.tumblr.com

And regarding modes of dress compared against race and class, it is insulting to the poor, urban people because Joan is acting as if the urban aesthetic is inferior and that rich, white boys shouldn't dress in a manner that is unbecoming of their class.

It isn't funny, but at the same time, what about cultural appropriation? Isn't the idea of high end urban-styled clothes jarring? Baby Phat isn't cheap, nor are other labels and brands referenced by Hip Hop, R&B, and rap artists particularly affordable whether it is about private jets, booze, shoes, cars, and other status symbols. It is as if the non-whites and low-class people are expected to want to code-up. In theory, this would make the idea of white boys wearing clothes that are coded as low-class funny because it is jarring and a subversion of our expectations.

Even if this was funny, I think the joke was entirely lost on the people who took the "jokes" as truisms rather than "hipster racism" and irony.

Yes, Ms. Rivers most certainly did make a racist comment, and it seems absurd that it has received so little notice. Not only is it a racist comment, but it seems to also be a very stereotypical comment. I believe that she is not only stereotyping the lower “ghetto” class as undeserving of riches and all the privilege that comes with life in the upper class, but that she is also stereotyping the “rich white boy” along the dimensions of race and class, as one who should not allow himself to stoop to the level of impoverished ghetto life. It is very sad to see this still going on today. Even if this was a comment made by Ms. Rivers that was intended to be only a joke, or an offhanded comment, well known authors to the field of discrimination and privilege, Picca and Feagin, speak on this concept of joking racism in their text “Two-Faced Racism.” They find that people will sometimes use discriminatory jokes to cover up, or lessen the blow when they express their racist opinions. I believe that this is exactly what happened with the comment made by Ms. Rivers.

As for the comments of the few spectators mentioned in this article, it seems reasonable to say that many of them either house racist views themselves, or are participating in colorblind racism. It seems to me like many of the comments have been offered as a means to justify Ms. Rivers comment by providing support, or offering reasons why it is not racist. In my opinion, her comment certainly is offensive to all parties involved because it classifies certain groups of people as being a certain way instead of looking at individuals for who they are on their own.

I believe what Joan Rivers said is blatantly racits. Racism, I think has a whole new meaning, instead of just dealing about race it covers every sort of aspect that could be demining to someone like socio-economic status, gender or race. I believe that because of her 'status' as a celebrity that people are more willing to agree with her. Imagine if someone said that about a random person; it would be a whole new meaning and people would see it as racist. She is stereotyping the upper class as in they have to dress a certain way to distance themselves from the 'ghetto.' She is doing the same to the 'ghetto' implying that they cannot dress as nicely as the upper class. These racist comments are being encouraged by celebrities like Joan Rivers and should not be taken lightly.