Boateng To Discuss Racism In Sports At UN 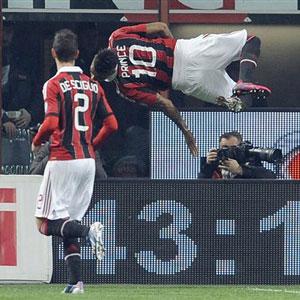 AC Milan midfielder Kevin Prince Boateng, of Ghana, who led teammates off the field in protest of racist abuse by fans in January, will discuss racism in sports at the UN. In this photo, he celebrates after scoring during a Serie A soccer match between AC Milan and Lazio, at the San Siro stadium in Milan, Italy, on March 2, 2013. Photo Credit: AP/Marco Rosi, Lapresse

GENEVA (AP) - AC Milan player Kevin-Prince Boateng, who led teammates off the field in protest of abuse by fans in January, will take part in a United Nations event next week discussing racism in sport.

U.N. High Commissioner for Human Rights Navi Pillay will open the 90-minute session at the U.N.'s European headquarters in Geneva.

Boateng is also scheduled to meet FIFA President Sepp Blatter the next day in Zurich.

FIFA is sending its head of social responsibility programs, Federico Addiechi, to the Geneva meeting, the U.N. Office said.

Powar is director of Fare, a network of fans' activist groups, whose stadium monitors have helped UEFA prosecute cases of abuse targeted at Italy forward Mario Balotelli at the 2012 European Championship.