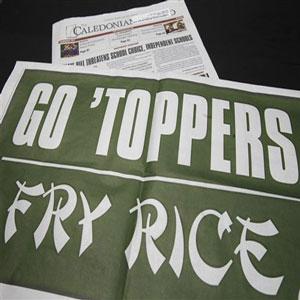 A Vermont newspaper is being criticized for a poster designed to boost the local high school basketball team before it played in the state championship. The Caledonian Record of St. Johnsbury ran a full-page poster that included the term “Fry Rice” using a typeface that mimicked Chinese calligraphy. In a letter to the Caledonian Record publisher, the Asian American Journalists Association said it was appalled by the page’s racist undertones. Photo Credit: AP/Toby Talbot

MONTPELIER, Vt. (AP) - A Vermont newspaper defended itself Saturday against accusations of racism over a poster it published in support of a local sports team that read "fry Rice" in type associated with Chinese calligraphy, saying it meant no offense and simply wanted to play on words.

The back-page poster, printed in Thursday's edition, was intended to support St. Johnsbury Academy's basketball team in its game against Rice Memorial High School in South Burlington, the Caledonian Record wrote in an unsigned editorial.

"We sought a simple play on words in support of an extraordinary group of local student athletes. Indulging our critics for a moment, the outcry reminds us that racial and ethnic stereotypes can offend - regardless of intent," the editorial said.

The editorial acknowledged that the poster's wordplay, punctuated by the chosen font, "evoked a particular ethnic cuisine," but did not constitute racism.

"We don't concede, however, that the use of imagery with any racial, ethnic, or religious inference is to inherently debase that race/ethnicity/religion," the paper said.

"A fair accusation of racism would at least pre-require the reference to actually be demeaning or degrading," the editorial said. "Simply invoking ethnic customs (food, dress, design,) doesn't do that, nor does it suggest any kind of characteristic about the culture, its people, or a history of oppression by the majority.”

But the editorial missed the point, said the president of the Asian American Journalists Association, who had criticized the poster after it was published.

"I'm not criticizing the Caledonian Record for rooting for their home team," said Paul Cheung, the association's president. While Cheung does not believe the newspaper's intention was to be racist, it showed "a lapse of judgment and poor taste."

"It evoked a racial undertone and a negative stereotype," said Cheung, who is also interactive and graphics editor for The Associated Press.

A private school, St. Johnsbury Academy serves local students and also, has boarding students from across the world, including Asia. Academy Headmaster Tom Lovett said Friday that none of the school's Asian students were offended by the poster.

"Overall, our students often see such things as a way to celebrate their culture, not demean it. And in this case, we chose to follow our students' lead and look at the Caledonian's intent, not taking offense where none was intended," Lovett said.

I think this newspaper definitely crossed some inappropriate lines by saying "Fry Rice". This woild not be the first time that discrimination occurred because of sports. We all understand the competitive spirit surrounding athletic events, and of course newspapers want to develop catchy and clever headlines. Unfortunately, this is unintentional racism. The fact that it was written in an Asian-like font pushed it over the edge. It makes the reader sort of read it in their head with a stereotypical Chinese accent as if you were ordering take out over the phone. It appears they are trying to get off the hook by saying, "We have Asian students here, and they weren't offended, so obviously we aren't racist". Just because they didn't have bad intentions doesn't mean that they are not perpetuating racial stereotypes.