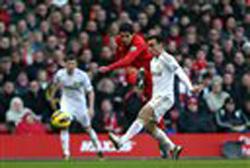 EDINBURGH, Scotland (AP) — FIFA President Sepp Blatter has set up a task force to address racism in soccer and will meet with a player who walked off the field in response to racial taunts.

Blatter said the new anti-racism task force will be headed by CONCACAF President Jeffrey Webb, who's in charge of soccer in North and Central America and the Caribbean.

Blatter is calling for a "united front of the football community in our zero-tolerance policy against racism."

AC Milan midfielder Kevin-Prince Boateng became the focus of the anti-racism struggle in soccer when he led teammates off the field in protest at abuse from fans of a fourth-tier Italian team during an exhibition in January.

Blatter faced criticism for saying that players mustn't run away from problems by leaving the field, but later praised Boateng for taking a "strong and courageous stand."

The Ghana midfielder will visit Blatter on March 22 at FIFA headquarters in Zurich.

"We have to work on it but we cannot do it alone," Blatter said from Edinburgh. "It is a big, big problem also of education and understanding, and (needs) a little bit also of solidarity. But we will do it because we have to kick it out."

Racism is prevalent again in English soccer in the past two years. There has been a spate of arrests for abuse at matches, and Liverpool striker Luis Suarez and Chelsea captain John Terry served bans for racially abusing opponents.