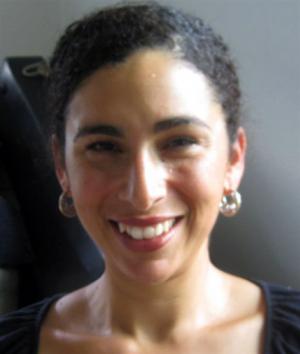 This Sept. 13, 2011 file photo provided by Shoshana Hebshi shows the Sylvania, Ohio, woman who says she was strip-searched after being led in handcuffs from a Frontier Airlines flight from Denver to Detroit on Sept. 11, 2011. Hebshi said she is of mixed Arab-Jewish heritage and was searched solely because of her appearance. (AP Photo/Courtesy of Shoshana Hebshi)

DETROIT (AP) - A woman who says she was ethnically targeted for a strip search at Detroit Metropolitan Airport filed a lawsuit Tuesday against an airline and federal transportation officials.

Authorities removed Shoshana Hebshi from a Frontier Airlines plane after it landed in Detroit on Sept. 11, 2011, the 10th anniversary of the terrorist attacks. The crew had reported suspicious behavior by two Indian-American men sitting near her, saying they spent a lot of time in a bathroom.

Hebshi, who describes herself as half-Arab and half-Jewish, said she and the men had never met before the flight and had nothing in common beyond a similar skin tone.

After removing her from the plane and handcuffing her, agents ordered Hebshi to remove her clothes, bend over and cough while being searched, she said in a complaint filed in Detroit federal court.

The freelance writer from Sylvania, Ohio, said she is concerned about what she believes was ethnic profiling based on her dark complexion and what that pattern of treatment might mean for her 7-year-old twins.

"I was frightened and humiliated," Hebshi told the Detroit Free Press. "As an American citizen and a mom, I'm really concerned about my children growing up in a country where your skin color and your name can put your freedom and liberty at risk at any time."

Hebshi said the U.S. has a "history of profiling and oppressing people who look different." She added that authorities assume "someone who is brown is a criminal."

Frontier and the Transportation Security Administration declined comment on the suit Tuesday.

Hebshi said no one ever told her why she was being targeted and what was happening.

"They wouldn't even tell me what was going on," she said Tuesday. "No would answer me."

The American Civil Liberties Union is assisting Hebshi in her lawsuit. ACLU lawyer Michael Steinberg said Hebshi "did nothing that was suspicious" to warrant such treatment.

I am completely shocked that events like this are still taking place. I understand that the job of security guards is to stop suspicious people and ensure that the airport is safe, but subjecting this woman to a strip search was completely out of line. I think the guards were right to do a more thorough search, but with all the body scanners and various other technologies in modern airports, there was no need to do a strip search. It may seem like a case of outright racial profiling, but I think it was just guards carrying out their jobs in the wrong way.