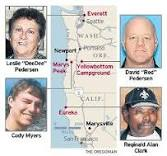 PENDLETON, Ore. (AP) - A white supremacist gang has been linked to several assaults in Pendleton, but the town's police chief has cautioned locals against any worries that supposed members of the European Kindred were inciting a wave of violence.

There may be six or seven men, mostly "couch surfers," living from place to place and stealing items to buy drugs, Roberts said.

Gangs have been in Pendleton for years, and police deal with many people "more or less enamored with the ideology" of white supremacy or other gangs, the chief said. But Pendleton usually doesn't have the same vandalism or more serious gang-related crimes that have happened in Hermiston and the Walla Walla Valley.

European Kindred - often called EK - was formed by two inmates in 1988 in the Snake River Correctional Institution. The gang has grown beyond prison walls, with about 300-350 members in Oregon prisons and a hundred or more living in Portland, the East Oregonian reported.

European Kindred has earned a reputation for violence and having a hand in dealing methamphetamine.

Roberts said his department doesn't know if the locals are bona fide members of the gang, but they have shown the desire to be.

One member, Joshua Teel, who turned 23 on Sunday, was involved with a group that harassed and fought with a black man Aug. 9 at Stillman Park, according to court records. Teel pleaded not guilty to charges of intimidation, riot and more.

Roberts said the attack that night fits the criteria for a hate crime. The case is pending.

Teel also was with Michael David Douglas Mason, 24, when he brandished a sawed-off shotgun last Friday night at a local residence, Roberts said. Teel got away, but police have a warrant for his arrest. Officers caught Mason and booked him into the Umatilla County Jail on unlawful weapons charges and more.