Where Are All The Lazy Mexicans? 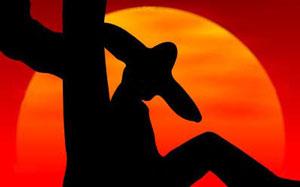 Ambrosio, my lawn guy, is the antithesis of a lazy Mexican snoozing in the sun with a striped serape on his shoulder and huge sombrero shading his head. He and his compatriots work long and hard in the sizzling Arizona sun, sweating bullets as they push a lawn mower and trim towering palm trees.

But last week Ambrosio didn’t show up. The last I heard, he had headed back to Mexico to escape the recent backlash against Mexican immigrants. In spite of the snoozing stereotype, the average Mexican works harder than most Americans would ever consider working, often working two or three jobs, and doing manual labor too menial for the red-neck Americanos, who claim immigrant workers are stealing their jobs.

Case in point, last Saturday a group of Mexican workers set about replacing a roof on the house across the street. These men whacked, thumped, and buzzed all afternoon stripping off shabby shingles and didn’t quit until it was too dark to see. Sunday morning they resumed whacking, thumping, and buzzing at 7:15 and didn’t take a break until they had finished the job later that afternoon, cleanup included! On Monday morning, the only sign these Mexicans had been there was a spanking new shingle roof.

In contrast, the house next door – owned and occupied by a blond, blue-eyed Anglo contractor who partially replaced his shabby shingle roof a couple of years ago, but then ran out of steam, spirit, or money to finish the job – remains an unfinished work in progress.

My favorite restaurant is another story of hard-working Mexicans. Seventy years ago, Josephina Picaza supplemented her day job income by making enchiladas for an Anglo woman’s bridge parties. Word got around about Josephina’s secret sauce, and soon she was able to quit her day job, get a $100 loan, and open a restaurant.

Josephina’s sisters helped out, and as their business grew, her husband Anselmo quit his job in the mines and joined them. Josephina and her family of hard-working Mexicans made their cuisine arguably the most popular in Arizona, and today her extended family owns and operates 16 successful restaurants employing hundreds.

And therein lays the added value of hard-working Mexicans. Though the essential ingredient in Josephina’s recipe for success was hard work, she also possessed that truly “American” ambition to rise up from laborer to owner, which ultimately creates jobs for others. Our economy relies on this ambition to survive and prosper, and Hispanics have it more than anybody!

Hispanic ownership of nonfarm businesses rose a whopping 43.7 percent from 2002 to 2007 and produced $345 billion in sales, according to the 2007 U.S. Economic Census on Hispanics while their population only grew 18 percent. They now own about 2.3 million nonfarm U.S. businesses, and these Hispanic-owned firms accounted for 8.3 percent of all nonfarm businesses in the United States, and 1.6 percent of total employment.

During that same period, Non-Hispanic business ownership only rose by 14.5 percent, indicating to anybody with half a brain that Mexicans are adding more than they are taking from our economy, and we shouldn’t look a gift horse in the mouth.

Or as Sonia Perez, Deputy Vice President for Research for The National Council of La Raza says, “We are already a very significant part of the current workforce. We will be even more significant in the future as Anglo birthrates decline, and Anglos grow older and retire. It’s in America’s best interest to invest in the Latino workforce.”

But if we aren’t careful, we’ll drive these hardworking Mexicans right out of our nation, and toward what end? Why are we trying to push away those who want to work hard, and contribute so much to this country at a time when we need the contribution so badly? Will we allow our xenophobic fears to sterilize America right out of a prosperous future?

Obviously, we need to fix our immigration policy and secure our border to the south. But before we decide on what to do about immigrants, maybe we should try to figure out who they really are, what the pros and cons of their presence really are, and why are we REALLY afraid.