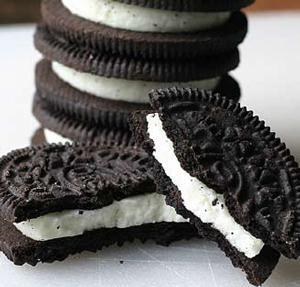 Since its 1912 debut, more than 419 billion Oreos crossed the production line-making it one of America's most beloved snacks.

However, the snack with a chocolate outside and white creamy filling, which brings joy to scores of Americans, is also a metaphor with a distinctively negative connotation. The term Oreo is a recognized racial slur toward African-Americans who assimilated into "white America."

The origin of the word's reference to African-Americans is difficult to pinpoint. However, Dennis Preston, professor of linguistics and languages at Michigan State University, points to the term tracing back as far in American history as the Civil Rights era.

As the victories of the Civil Rights movement led to integration, using the word Oreo against certain African-Americans surged in popularity. Racial integration in the work place, educational institutions and neighborhoods, drove a wedge between African-Americans who behaved in ways mainstream society expected and those who did not.

"I remember the term being used from the time I was a kid," recalls Preston. "The term used to refer to the guy who went around acting black, being black, talking all the right things, dressing the right way, doing things that make him appear as an authentic member of African-American culture. However, when you take the two ends of the cookie apart and look on the inside, he's really a white guy, and as such, sympathetic to white positions and white things."

So who qualifies as an Oreo by modern standards? Africans who immigrate to the U.S. and fail to assimilate into traditional African-American culture may fall victim to the label.

Alexander Weheliye, associate professor of English and African-American Studies at Northwestern University, was on the receiving end of such name calling when he moved to the U.S. from Africa.

"I remember first hearing it when I moved to the U.S. in 1980," Weheliye says. "Back then, it was used to describe or identify biracial or multiracial people as well as people who were black on the outside and white on the inside, as in the Oreo cookie. I think that meaning has shifted. Generally, nowadays I think it is used to refer to people who are black but don't act in particular way."

There is another slang definition for Oreo. Just ask Kelsey Blackwell, who grew up in Utah. She says people use the word when someone senses a threat to a self-created definition of blackness.

"Because I was in Utah, there were a not a lot of black people around," says Blackwell, a writer for Southern Living magazine. "And because there were so few black people, they bonded over being black, liking the same music, and having the same characteristic black traits. When I came in and did not act the way they expected, it was almost offensive to them. They were trying to define themselves by their race, yet here was a black person who did not represent what they think black should be. It put everything they had used to define themselves into question."

Although the term Oreo, thought to be used exclusively by blacks, is according to some race experts, a term used by the masses.

"It's hard to say who uses it more, but I think whites often use it in reference to particular blacks," says Charlton McIlwain, co-director of the Project on Race in Political Communication at New York University. "I think when whites use it, they think they are making a positive statement, but what they are saying is 'you're more like one of us than one of them. And obviously that is better and to be preferred.' They say this without realizing the presumption that it makes, which is white is good, black is bad."

For African-Americans like Weheliye, the word promotes the perception that blacks do not perform well academically or know how to behave in a civilized manner.

"There is no reason at this point in time for all black people to be the same," says Weheliye. "Black people can be different yet have similar political goals and so forth. I think the word Oreo plays into the system a little bit too much for me because it eludes that a certain type of education, way of behaving and presenting yourself are characteristics that only white people possess."

I thought this article was very interesting. I find that people do judge other's based on the make up of the oreo cookie. I think it is stupid for people to make judgements like that based on how a person acts. All people in society act how they are brought up, there is no certain way people have to act because the color of their skin. People that compare blacks to an oero because they did not "assimilate" correctly just doesn't make sense to me. Today in our world everyone is different and thats what makes them who they are so judging someone to a cookie just doesn't make any sense.

I always found it strange how people immiedatley assimilate individuals in the racial categories of black and white. So this article really did a good job to show this idea in a interesting and unique way. Atleast in my life i rarely hear correct forms of stating which race an individual is. You never hear in the media "Oh he is Caucasian", or "Oh she is Hawaiian, Mexican, Arabian". These are just examples but i feel that in the media and pop culture in general you only really here the terms black and white. Emmiedatley someone who is White, they are white. It doesn't matter if they are Irish, or have deeper roots than what is seen. To everyone they are almost always seen as just white. It is the same for a African American. If someone sees an individual with darker skins to most they are almost always considered black when really there is almost always more to the eye. This is a very unique article that expressed this problem we have in America about Racial Stereotyping. http://www.usariseup.com/labels-stereotypes/oreo-more-just-cookie

Reading this article I was amazed that the word was still being used. The first time I heard this word being used was during my junior high years, which I can tell you was more than 25 years ago. My best friend, Cyrano was black. We were the best of friends. One day as we were going to the locker room. Some black students called her "Oreo." I was naive, I didn't know why they would be calling her by the name of a cookie. I had never heard the word used in that manner. When she explained to me what it meant being called an "oreo" I was devastated for her. Cyrano didn't seem to be outwardly disturbed. I was scared that she was going to be beaten up. Cyrano's calmness was comforting. She then told me she wasn't afraid and that she would chose her friends and not by the color of their skin. On that day Cyrano taught me a lot about the racism and prejudice that existed in our school. Her willingness to continue our friendship in the face of being ostracized was a gift I have always carried. Cyrano wherever you are thank you.