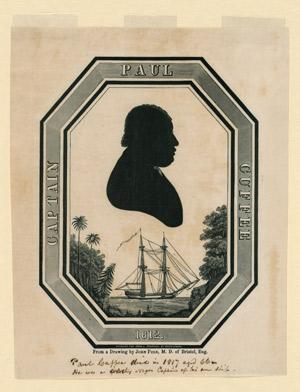 Black whaling captains thrived in a world others did not want to pursue.

When most people think of 18th and 19th century whaling captains, they envision Captain Ahab of Melville’s “Moby Dick,” scarred, weathered and white. But a handful of whaling ships during the peak of that industry’s success between the late-1700s and late-1800s were captained by men of much darker complexion. From Massachusetts to California, a small but successful group of black whaling captains thrived during and just after the civil war when many of their brethren toiled in bondage or near servitude.

High mortality rates and grueling labor made the whaling industry undesirable for most, but was easily filled by African-Americans willing to accept the danger. Some black seamen in the business were Americans from the northeast and the southern regions of the U.S. Others were from the West Indies with a significant group from the Cape Verde Islands off the African coast, according to the National Park Service website. Whatever their origin or ethnicity, black mariners found acceptance not based on their race, but as hard working and skilled seamen in an industry that was physically demanding, filthy, and often financially unrewarding at most levels.

For the few who rose to the top of their craft, black whaling captains found accomplishment and notoriety unparalleled in other jobs available to African-Americans and other ethnic minorities of the time. And for many, success on the sea led to further success in other entrepreneurial endeavors.

American, or “Yankee,” whaling began around the same time colonists started settling in the New World. But harvesting and hunting of sperm whales began in New England in the 1700’s and continued nationally until the early 20th century.

The mid-19th century was the peak of the industry when about 70,000 people were engaged, according to most estimates. Whales were hunted for oil that could be used in lamps and in the manufacturing of wool, leather and soap. The average whaling voyage was two to three years. Crew members got a percentage of the total value of the oil and bone taken on a voyage, separated according to their positions on the crew and their experience.

The dirtiest part of the whale voyage was obtaining the whale oil from the blubber by cooking, or rendering, the fatty layer of tissue in huge boiler-like tanks.

Stuart Frank, senior curator at the Whaling Museum of New Bedford in Massachusetts describes the regional whaling industry as one of promise and success for African-Americans.

“The strength of the Quaker religion on Nantucket and, to a lesser extent Martha’s Vineyard, made it more likely for African-Americans to take part in the industry,” Frank says. 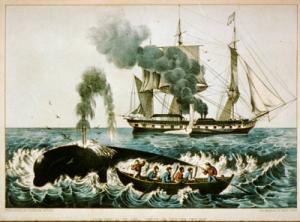 In the late 1700s, New Bedford whaler and merchantman Paul Cuffe (1759-1817) set the bar for other African-Americans wishing to make their livelihoods on the high seas. The son of a Quaker’s slave, Cuffe followed his father’s faith and at a young age worked on whaling ships as a teenager. His religion allowed for bonds to build beyond the church in the business world as well, according to the African-American Registry website. He later ran guns on ships for the Americans during the Revolution and became a successful merchant marine as well.

The town of Edgartown, Mass., on the island of Martha’s Vineyard, served as a secondary port to the larger whaling centers of New Bedford and Nantucket Island. There, William Martin (1830-1907), whose grandmother was a former slave, was accepted in the community because of his natural abilities on the ocean and his use of the pen.

“He did go to school in Edgartown and became a skilled writer,” says local historian Elaine Weintraub. “In those days, there were classes for girls on how to sew sails and for boys on maritime navigation.”

He began keeping the ships logs on leaving Edgartown and quickly moved to commanding his own ships, according to Weintraub.

In 1857, Martin returned from a successful whaling voyage aboard the vessel Europa with a Wampanoag woman, Sarah Brown, who he had married. Between voyages, Martin lived with Sarah and her family on Chappaquiddick on land designated for American Indians. He decided to live his life there and not move to Edgartown Proper where the other whaling captains lived.

The success for black men in the whaling industry was, of course, not limited to the North East. 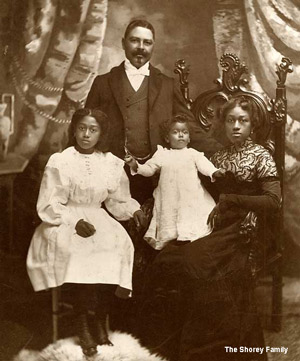 William T. Shorey (1859-1919, fondly referred to as the Black Ahab, was one of the last great black whaling captain/ businessmen of his era. Shorey was born in Barbados, the son of a Scottish sugar planter and a Creole woman and began his life on the sea as a teenager and in 1876 first sailing on a whaling vessel off the East Coast.

His whaling career brought him to California where he married into a prominent African-American, Bay Area family. In San Francisco, 1886, he became the only black West Coast ship captain. Known for his skill and leadership, Shorey experienced many adventures and dangers on waters from the south Pacific to the Bering Sea alongside his multiracial crews before retiring in 1908.

With the advent of the steam-ship in the early 20th century jobs for black seamen dwindled as those ships demanded more technical expertise and less crew to run.

This left only menial positions as ship cooks, stewards and deck hands. Gone were the days when a black man with solid maritime know-how, the right connections and a taste for adventure could find such successes of old.