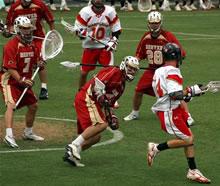 Baseball, which became popular in the mid-1800s, is called America’s “national pastime.” But it is the lesser-known sport of lacrosse that lays claim as America’s first homegrown sport. In 1636, a Jesuit missionary, Jean de Brebeuf, wrote the first account of a lacrosse game played by members of the Huron tribe in Canada.

By that time, the game already had taken deep cultural roots in Native American history. It had been played in various forms, for hundreds of years, by at least 48 Native-American tribes throughout the region that is now southern Canada and the United States.

Lacrosse is played using a stick with a netted racket at the end, which is used to throw and catch a ball, and to pick it off the ground in order to convey it into a goal to score a point. The Cherokees called the game “the little brother of war” and played it as preparation for war to develop strong and virile warriors. The Iroquois still call it “the Creator’s game” because it is considered a gift from the Creator, to be played for His enjoyment or as a healing ceremony. The current name evolved because French missionaries thought the stick used in the game resembled a crosse, a shepherd’s crook carried by church bishops to show their authority.

The sport was modernized with written rules in 1867, and the traditional hair-stuffed deerskin ball was replaced with a hard rubber ball. During the late 19th century, the game’s popularity within Native American tribes receded and the sport soon became the province of elite prep schools and colleges in the northeastern United States.

Today, lacrosse has seen a resurgence of interest within the community that created it. The North American Minor Lacrosse Association (NAMLA) has been in existence since 2004, and is comprised of lacrosse organizations that represent the Native communities of Allegany, Newtown, Niagara, Tonawanda, Onondaga and Oneida.

Even though America’s oldest sport still does not rival the popularity of baseball, it is one of the fastest-growing sports in America today, with over half a million players nationwide, 400 college teams and 1,200 high school men’s lacrosse teams across the country.