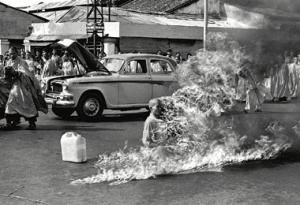 On May 16, 1967, during Vesak — the holiday celebrating of the birth of Buddha — Nhat Chi Mai, a Vietnamese religious disciple, publicly burned herself to death outside the Tu Nghiem Temple in Saigon to protest the ongoing Vietnam War.

The reverend Quang Duc, a 73 year old buddhist monk, is soaked in petrol before setting fire to himself and burning to death infront of thousands of onlookers at a main highway intersection in Saigon, Vietnam, June 11, 1963.

Nhat Chi Mai’s death has been described as self-immolation, which differentiates itself from suicide as being an altruistic self-sacrifice through religious ritual. In the theory of religious sacrifice, one sacrifices a victim in order to communicate with a higher being. Self-sacrifice is sometimes viewed to be the ultimate gift because it comes at the greatest cost. One of the self-immolator’s main purposes is to draw a community together.

Accounts of self-sacrifice in the Buddhist tradition are sporadic, as it is not a practice that is commonly promoted. Examples of self-immolators in history are commonly used as parables, rather than individuals to be directly emulated. In this way, it is notably comparable to the Judeo-Christian example of Jesus Christ. However, Westerners typically have difficulty wrapping their minds around the idea of self-immolation. Many American individuals at the time viewed Chi Mai’s self-sacrifice, even in protest of the war, as an irrational act of a religious zealot.

However, accounts of Nhat Chi Mai before her death describe her as being of rational mind and body. Before her self-sacrifice, she was happy and calm, according to Sallie King, author of They Who Burned Themselves for Peace.

“In the time between her decision to sacrifice herself and her act, Nhat Chi Mai is reported as having been very joyous,” writes King. “During that period she spent three weeks with her parents, evidently giving them a final gift of herself. When she returned to her religious community, she was beautifully dressed and evidently very happy, laughing and smiling. Everyone thought she must be going to be married.”

Nhat Chi Mai’s act was a political success. It was effective in the peace movement against the war. Up until that point, Buddhists had been criticized by the South Vietnamese lay people for being pacifists, therefore aligning with the enemy. Her community was profoundly affected by her sacrifice.

A colleague of Mai wrote, “On the day after Mai’s sacrifice, many newspapers carried blank spaces where the news of her act had been censored. Word of her death traveled only by friends, but even so, on the day of the cremation, a huge crowd came to the ceremony. When the funeral car reached Phu Lam Bridge, the crowd behind it stretched more than five kilometers, all the way back to the Tu Nghiem Pagoda. Students and teachers, merchants and vendors, politicians and priests were all present. I was surprised to see so many wealthy men and women who, until then, had accused us of being under the control of the communists.”

Nhat Chi Mai left behind a letter to the American government in which she wrote, “I offer my body as a torch / to dissipate the dark / to waken love among men / to give peace to Vietnam / the one who burns herself for peace.”