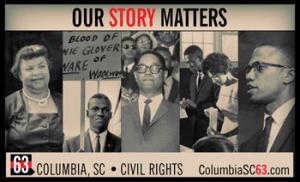 This undated photo provided by the Midlands Authority for Conventions, Sports and Tourism shows the picture and text from an historical marker that was unveiled in Columbia, S.C., on Friday, March 14, 2014. The city is unveiling a series of markers officials hope will help educate visitors and residents alike about the city's place in history. Photo Credit: The Associated Press, Midlands Authority for Conventions, Sports and Tourism

Columbia, South Carolina played a role in civil rights and wants its citizens, the country and the world to know it with the recent unveiling of a memorial.

In 1960, Simon Bouie - a black student at Allen University - was arrested for the only time in his life while leading a sit-in aimed at integrating a lunch counter in South Carolina. With hundreds of fellow students, Bouie went to a Columbia drugstore, sat on a stool, and was taken to jail for trespassing.

"It was kind of a fiery time, and everybody had their guards up," Bouie, 74, said by phone recently, from his home in Philadelphia, where he is a pastor. "Local people, it was just a shock to them to see all of us come in and sit there. They were seeing something they had not seen before."

Even decades later, Bouie's voice is animated as he describes the desire he and other young people had to see such places desegregated. The Columbia drugstore itself has been closed for years, although the building that housed it still stands.

Bouie's conviction was ultimately overturned by the U.S. Supreme Court, which ruled it was illegal to charge people with trespassing without prior warning. More than 50 years later, he is returning to Columbia to celebrate a renewed interest in discovering the civil rights past of South Carolina's capital city. 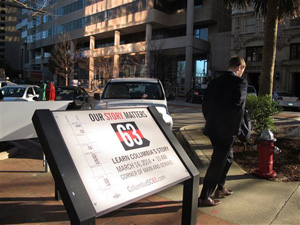 Last Friday, he was one of a number of former activists on hand for the unveiling of a series of commemorative markers with images and information of notable events that took place in the Southern city. Several were near the site of the former drugstore.

The event is part of Columbia SC 63, a retrospective effort undertaken by city officials to mark Columbia's place in the civil rights movement of the 1950s and 1960s.

Like many southern cities, Columbia played a role in the campaign for equal treatment for blacks, as students held sit-ins and marched on the Statehouse. Allen University and Benedict College, both in Columbia's downtown, served as incubators for many black student activists.

Until now, much of that history hasn't been widely discussed or displayed, and city officials hope visitors and residents alike can now get a better understanding of the city's place in history.

"It permits Columbia to insert itself in the national narrative," Bobby Donaldson, a historian at the University of South Carolina, said of the look back at the city's history. "The Columbia story is a reminder that the movement took place in many places around the country."

In the 1960s, activists in many states around the South fought to integrate whites-only facilities, such as lunch counters and public swimming pools. While part of the overall struggle, however, some of Columbia's activities might have been overshadowed by higher-profile events elsewhere, like attacks on the "freedom riders" throughout the South, or the arrest of the Rev. Martin Luther King Jr. during protests in Birmingham, Ala. 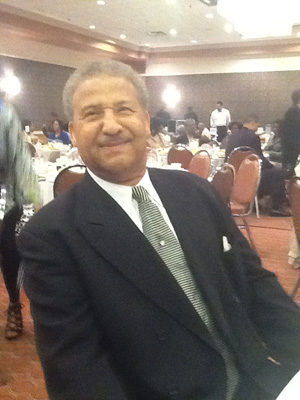 Donaldson has been part of a team researching the civil rights era in Columbia, poring over archival photographs and interviewing activists to piece together details from a somewhat forgotten history. Some of that story, Donaldson said, included tidbits like knowing activist Malcolm X had appeared in Columbia, but not exactly where or just what he had said.

"Now, we're able to fill in a great many of the details and allowed to show that the movement in Columbia was not isolated," Donaldson said. "These were leaders and students who were active with each other."

To Donaldson, part of the reason that Columbia's past may not have previously been discussed in detail is because many of its participants, like Bouie, left the area and now live all over the country.

"When they left, they took the memories and the history with them," he said. "I'm hoping we can reach even more of those people, to let them know we are very eager to know more about their experiences here."

Activists like Bouie have contributed to other happenings over the past year that have been part of that education. A downtown movie theater hosted "civil rights Sundays," showing free movies, accompanied by a question-and-answer session. The Richland County Public Library housed a gallery for photography from the era. A national traveling exhibit about the civil rights era made a stop in Columbia.

"We have been able to kind of put our arms around our story," said Kim Jamieson, spokeswoman for the Midlands Authority for Conventions, Sports and Tourism. "There are still pages being added to that story."