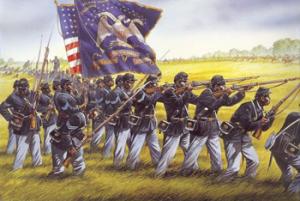 The Illinois State Military Museum will recount the role of black soldiers in the Civil War an World War I. Photo Credit: 29thusct.com

The service of black soldiers and airmen is being remembered at two museums in recognizing Black History month, one in the state of Illinois the other in the state of Ohio.

The first museum, the Illinois State Military Museum, is recognizing Black History Month by telling the stories of African-American soldiers who served during the Civil War and World War I.

The soldiers all were members of the Illinois National Guard.

Bill Lear is curator of the museum, which is located in Springfield. In a news release Friday, Lear says the museum wants to recount pieces of history that may not be well known to Illinois residents. He says displays like these "help tell the complete story" of Illinois National Guard service.

In the museum lobby is a U.S. flag that the 29th U.S. Colored Troops - the only African-American regiment from Illinois – carried during the Civil War. The displays will be open through Feb. 28. 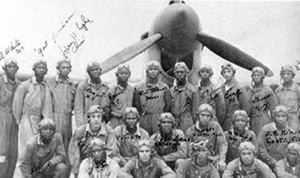 The second museum, the National Museum of the U.S. Air Force in southwest Ohio is highlighting aviation heroes and milestones for Black History Month.

The museum near Dayton offers a self-guided audio tour pointing out exhibits about events and figures such as the integration of the U.S. Air Force and about Eugene Jacques Bullard, the first black fighter pilot in World War I.

The museum is working on expanding its Tuskegee Airmen exhibit in the World War II Gallery.

The museum will also show "Red Tail Reborn," featuring the black airmen who joined the war effort as pilots.

February is designated as Black History month, and USAonRace will be publicizing the special programs, forums and other events as the nation continues to set the historical records straight about the role African Americans played throughout its history.

I think it is great to recognize the people that made a difference in this country, especially military. Black history month is a very important month to have, just to have everyone realize that African Americans went through a lot to get to where they are now and they were very strong and courageous people to fight for themselves even if it would harm them.