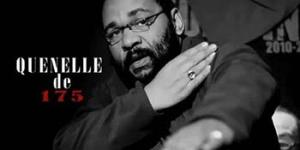 Racist and Anti-Semitic jokes and slurs seem to be a part of Dieudonne’s, a French Comic, performances. He has been convicted several times for inciting racism. Photo Credit: jewishpress.com

Dieudonne, a Paris comedian with a small but faithful following, is being investigated for an alleged anti-Semitic slur during a recent show directed at a journalist for France-Inter radio. Interior Minister Manuel Valls said last week he's seeking to ban Dieudonne's performances as a risk to public order.

Dieudonne has been convicted of inciting racism more than a half-dozen times, most recently last fall for a song using a play on words making light of the Holocaust. Dieudonne denies that is the case but he lost an appeal in November.

He is increasingly known for a hand gesture picked up by fans and celebrities described by detractors as an "inverted Nazi salute."

Most recently, soccer player Nicolas Anelka used the sign – one hand down, the other placed on the opposite shoulder – to celebrate a goal in a Premier League match. Both Anelka and Dieudonne claim the salute is anti-establishment and not anti-Semitic. 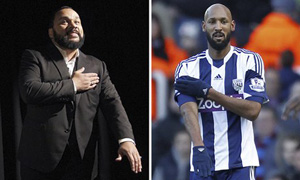 The comedian embarks on a tour of France this month, and some cities have said they don't want him in town.

The mayor of the eastern city of Nancy, Andre Rossinot, issued a statement Thursday saying that when free expression "transforms into racist, xenophobic and anti-Semitic propaganda there is reason to react."

In a statement released by the San Antonio Spurs, basketball star Tony Parker apologized last week for making the gesture three years ago, saying he "thought it was part of a comedy act."

The Paris prosecutor's office said Thursday it is investigating threats against a comedian the French interior minister wants banned from the stage for what he says are racist and anti-Semitic performances.