Martin Delany Was First Black Major in U. S. Army 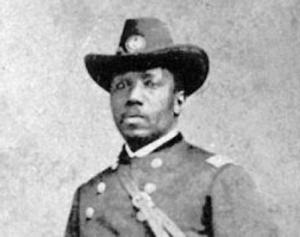 In early 1865, after helping to organize thousands of African-American troops for the Union, Delany was made a major in the U.S. Army by President Lincoln. He was the first black man to achieve that high of a rank. Photo Credit: post-gazette.com

Martin R. Delany was the first black major in the United States Army and one of the founders of the "Back to Africa" movement of the 19th century.

Delany believed that African-Americans would never be safe from prejudice and discrimination in this country and that they needed their own African nation in order to enjoy a life free from racism. Given America's sad racial history since the end of the Civil War, can we really say that he was wrong?

Delany was born on May 6, 1812, in Charlestown, West Virginia (at that time still part of Virginia). As a child he would sit spellbound listening to his grandmother tell tales of his African homeland and his tribal chieftain ancestors. Besides having an active imagination, Delany also learned how to read. His neighbors became upset at a black child showing so much intelligence, forcing the Delany family to flee to Pennsylvania.

As a young man Delany got involved with the Underground Railroad. He made his way to Rochester, New York, where he made the acquaintance of another fiery young African-American named Frederick Douglass.

Douglass said of Delany: "I thank God for making me a man simply, but Delany always thanked Him for making him a black man."

When the Fugitive Slave Act of 1850 went into effect, Delany became convinced that blacks weren't safe anywhere in the United States. He decided that emigration to another country, preferably their own in Africa, was the only way for blacks to be safe. Delany himself moved to Canada. 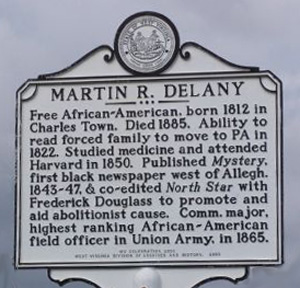 In 1859, just two years before the Civil War erupted in the United States, Delany explored parts of Africa to try and find a suitable location for his black homeland. He successfully negotiated an agreement to start a settlement in part of present-day Nigeria, but the Civil War disrupted his plans.

In early 1865, after returning to the U.S. and helping to organize thousands of African-American troops for the Union, Delany was made a major in the U.S. Army by President Lincoln. He was the first black man to achieve that high of a rank in the army. It was also the highest rank any African-American would achieve during the war.

In 1878, as the gains African-Americans initially made during Reconstruction were reversed by conservative elements in the South, Delany became involved in one final attempt to help blacks emigrate to Africa. He even helped buy a ship for that purpose, but then had to withdraw from the project because of financial constraints.

Delany died on January 24, 1885 in Ohio, still as fiercely proud of his race as he had ever been.

History, it is often said, is written by the winners, and the winners as far as the United States is concerned are white men and women. Thus American history skips over most of the African-Americans of note – such as Martin R. Delany. This is just a brief effort to set the record straight.