Mandela Was One of Us in His Greatness 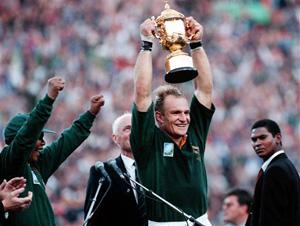 In this June 24, 1995, file photo, South African rugby captain Francios Pienaar, center, raises the trophy after receiving it from South African President Nelson Mandela, left, who wears a South African rugby shirt, after they defeated New Zealand in the final 15-12 at Ellis Park, Johannesburg. Mandela strode onto the field wearing South African colors and bringing the overwhelmingly white crowd of more than 60,000 to its feet. They chanted "Nelson! Nelson! Nelson!" as Mandela congratulated the victorious home team in a moment that symbolized racial reconciliation. South Africa's President Jacob Zuma said, Thursday, Dec. 5, 2013, that Mandela has died. He was 95. Photo Credit: The Associated Press, Jan Hamman, File)

He emerged into bright winter sunshine, stepped onto the lush field and pulled on a cap. His long-sleeve green rugby jersey was untucked and buttoned right up to the top, a style all his own. On the back, a gold No. 6, big and bold.

Within seconds, the chants went up from the fans packed into Ellis Park stadium in the heart of Johannesburg: "Nelson! Nelson! Nelson!"

Nelson Mandela, South Africa's first black president, was wearing the colors of the Springboks and 65,000 white rugby supporters were joyously shouting his name.

It was 1995. The Rugby World Cup final, rugby's biggest game. And yet it was much more. It was nation-defining for South Africa, a transcendent moment in the transformation from apartheid to multi-racial democracy.

The day spawned books and a blockbuster Clint Eastwood movie. It still speaks - nearly 20 years later - to what sport is capable of achieving. With his cap and a team jersey, Mandela showed an incisive understanding of the role sport plays in millions of lives.

Mandela died Thursday at the age of 95. A statesman, he didn't just have brushes with sports, occasional appearances timed only for political gain. Mandela embraced them wholeheartedly - rugby, football, cricket, boxing, track and field, among others. And, by many accounts, he truly loved athletic contests, with their celebration of humanity and how they unite teammates, fans and countries in triumph and, sometimes, in despair. At one time in his youth, Mandela cut an impressive figure as an amateur boxer.

On June 24, 1995, Mandela and South Africa were triumphant. And he may just have saved a country by pulling on that green and gold jersey with a prancing antelope on the left breast. The Springboks were dear to the hearts of South Africa's white Afrikaners and loathed by the nation's black majority. By donning their emblem, Mandela reconciled a nation fractured and badly damaged by racism and hatred.

"Not in my wildest dreams did I think that Nelson Mandela would pitch up at the final wearing a Springbok on his heart," South Africa's captain on that day, Francois Pienaar, said in a television interview some time later. "When he walked into our changing room to say good luck to us, he turned around and my number was on his back. "It was just an amazing feeling."

Mandela also could leave millionaire sportsmen like David Beckham and Tiger Woods star-struck. "Allow me to introduce myself to you," Mandela joked to then-England soccer captain Beckham when they met in 2003. Only there was no doubting who wanted to meet whom. A young Woods came out of his audience with Mandela proudly clutching a copy of the president's autobiography.

Beckham, sitting - almost shyly - on the arm of Mandela's chair, said his meeting was "an amazing honor," even if Mandela wasn't sure what to make of the superstar's hairstyle of the moment - dreadlocks. "I'm too old to express an opinion on the latest developments for young people," Mandela said with a laugh.

In fact, Mandela, who came out of prison at 71 after decades of isolation, never lost touch. It was part of what made him an inspiration for sport and sportsmen and women. While he was incarcerated, South Africa was thrown out of the Olympics for over 30 years and only allowed back in after he was released.

Now, Mandela, known affectionately to South Africans by his clan name Madiba, was wearing the No. 6 jersey of Pienaar - the Afrikaans rugby player with whom he had struck up a close friendship. The relationship was portrayed by Morgan Freeman and Matt Damon in the film "Invictus" and took rugby and the story of the '95 World Cup to millions unfamiliar with South Africa's game. 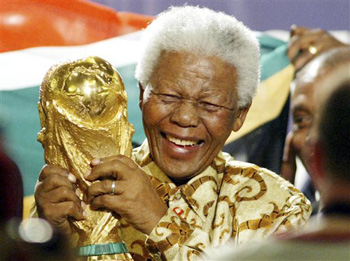 The underdog South Africans won that day, beating New Zealand - the top team in the world - in extra time of a nerve-racking final.

"We underestimated how proud it would make South Africa," Pienaar said, recalling the tournament and telling of how Mandela would phone him up regularly to check on the team. "It would be Madiba, wanting to chat to me, to find out what's happening. Is the team focused? Are they OK? Are the guys cool?"

The phone calls told of Mandela's desire for the Springboks to win for all South Africans, but also his affinity with sport.

He repeated his success in 1996, this time wearing a South Africa national football team shirt as Bafana. Bafana claimed the African Cup of Nations title, again on home soil. With Mandela, it appeared you couldn't lose.

He also was pivotal in helping South Africa eventually win the right to host the 2010 World Cup, the first in Africa and perhaps the biggest test of South Africa's progress, of its coming of age, just 16 years into its young democracy. South Africa came through it with high praise, sweeping aside the doubters - as Mandela said his country would.

Mandela's last public appearance for South Africa was at that World Cup final in Soweto, the township closely connected to the struggle against apartheid and the center of the world again for a few weeks - this time in celebration. By then, Mandela was old and, unable to walk for too long and bundled up against the cold in a thick coat and hat, he circled the stadium on a golf cart.

South Africa, and the world, couldn't celebrate the country's biggest sporting moment without him. Yet, painfully maybe, it reminded them of a former Mandela. One 15 years earlier.

As he strode out onto the Ellis Park field in June 1995, Mandela stretched out his hand as he approached a line of muscular, young, mostly white South African players. He was crossing a chasm, both in sport and in politics. And yet, he made the journey smoothly and with a smile.

After South Africa had won the final 15-12, a fairytale ending to its first major event as a democracy, Mandela - still in his jersey - handed the glistening gold World Cup trophy to the blonde-haired Pienaar, an ideal picture of a new South Africa. Mandela reached out his left hand and laid it on Pienaar's right shoulder, patting it gently.

And then Mandela raised both his arms in celebration, smiling gleefully with undisguised delight as Pienaar lifted the cup.

"Sport can create hope, where once there was only despair. It is more powerful than governments in breaking down racial barriers. It laughs in the face of all types of discrimination," Mandela said.

And he proved it.