In this Sept. 22, 2013 file photo, Pittsburgh Steelers head coach Mike Tomlin, right, talks with offensive coordinator Todd Haley during the fourth quarter of an NFL football game against the Chicago Bears, in Pittsburgh. The arrow for the Steelers is, as coach Tomlin likes to say, "pointing up" heading into a showdown with AFC North rival Baltimore. Photo Credit: The Associated Press, Gene J. Puskar

According to a recent report issued by The Institute for Diversity and Ethics in Sport, the National Football League is hiring more blacks and Latinos, earning an A for the fourth consecutive year for its racial hiring practices. This grade was earned, however, despite concerns over a dramatic drop in minority head coaches this season.

The league also drew a C+ for gender hiring practices in the annual report by The Institute. Overall, the total number of women and people of color at or above the vice president level in the NFL increased by 11 percent. The league received an overall grade of B.

The institute says it issues the grades in relation to the overall patterns in society.

Richard Lapchick, the main author, said the league continues to receive high grades because of what he sees as a continued emphasis on diversity from NFL Commissioner Roger Goodell and his staff. "It's been a priority of his commissionership since he took over," Lapchick said, pointing to Goodell's decision to hire Robert Gulliver as the executive vice president of human resources and chief diversity officer in 2010.

However, the number of coaches of color in the NFL has unexpectedly fallen from a league-high eight in 2011 to four this season. The report also expressed concern that of the eight NFL coaching vacancies this offseason, none was filled by minority candidates.

"I think it's a big concern not only for people who monitor it like myself, but for the league as well," Lapchick said. "I don't think the league was expecting that to happen. The telling tale will be what happens after this season." Lapchick believes the "Rooney Rule" – a mechanism to assure that teams interview at least one minority for their head coaching vacancies – is still working. But he said perhaps more can be done. 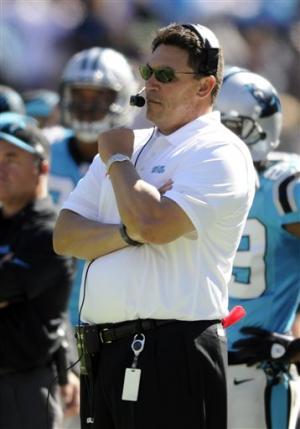 Lapchick points to an initiative taken by college football - gathering minority assistant coaches and athletic directors at conferences in an effort to introduce the ADs to potential head coaching candidates. "If the NFL does something like that at the annual meetings it might help," Lapchick said.

In 2011, the NFL launched the Women's Interactive Network to help accelerate career advancement for women in the NFL. It was one of the several programs designed by the league to foster greater diversity. It seems to be working well. According to Tuesday's report, the league office has 20 women and 14 ethnically diverse employees at or above the vice president level, both increases from last year.

The NFL also broke two barriers this past year: The San Francisco 49ers hired Gideon Yu as the first president of color in league history; the Jacksonville Jaguars' Shahid Khan, a Pakistani-born American businessman, became the first majority owner of color. There are six African-American general managers in the league, including Ozzie Newsome, who became the second GM of color to win a Super Bowl last season with the Baltimore Ravens. General manager Jerry Reese of the New York Giants has won two Super Bowl titles.

Lapchick notes that nine out of the last 14 Super Bowl participants have had either an African-American head coach or general manager. Amy Trask, of the Oakland Raiders, is the only female president or CEO of a team in the NFL. She has held that position since 2005.

On the field, the percentage of African-American players decreased slightly from 66.6% in 2011 to 66.3% last season.

The NFL also received an A+ for gender diversity initiatives.

On the web: The Institute of Diversity and Ethic in Sport