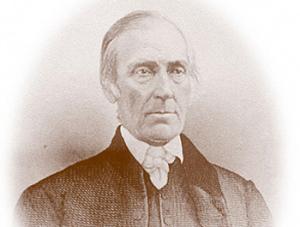 Levi Coffin was a Quaker from North Carolina and came to be known as the "President" of the Underground Railroad because it is estimated that he helped over nine thousand fugitive slaves through Cincinnati and Indiana to their freedom.

The Underground Railroad, of course, was a series of safe houses or locations that runaway black slaves could stay on their way to Canada after escaping slavery. Each safe house was a "station" and each person who ran the house a "conductor".

Born in Guilford Courthouse, North Carolina in 1798, Coffin developed an intense hatred of slavery while still a young boy.  He asked a slave why he was bound and the man replied that it was to prevent him from escaping and rejoining his wife and daughter. Right then and there Coffin became intensely opposed to slavery.

In 1826, facing pressure from slavery supporters in North Carolina, Coffin moved to Newport (now Fountain City). In doing so he was following thousands of other Quakers who were fleeing to the Northwest Territories, where slavery was illegal and land plentiful. Coffin was soon a successful businessman. His wealth enabled him to become heavily involved in the Underground Railroad. 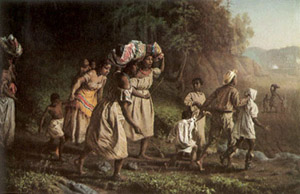 Soon Coffin was helping so many slaves escape that his home was known as "Grand Central Station of the Underground Railroad." Coffin would move the slaves at night, under cover of darkness, to their next location. His life was threatened many times, his businesses suffered financial reverses, but Coffin never wavered in his desire to help fleeing slaves. "I always thought it was safe to do right," he said. Though he moved several times, Coffin would repeatedly help slaves escape via the Railroad. One such slave, who arrived at his home nearly frozen to death with her baby, became the model for little Eliza in Harriet Beecher Stowe's influential book Uncle Tom's Cabin.

Coffin is estimated to have helped almost 10,000 slaves escape bondage and find freedom. After the Civil War he was instrumental in forcing the federal government to aid newly-emancipated blacks. When he died in 1877 in Cincinnati, so many people wanted to pay their last respects that hundreds had to be turned away.