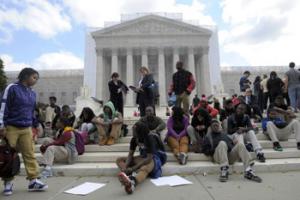 The Supreme Court will hear an appeal to overturn the ruling of a lower court in Michigan, which ban the consideration of race in college admissions. Photo Credit: tv.msnbc.com

The Supreme Court will hear yet another race-based college admissions case on October 15, agreeing to review a lower court's decision that said Michigan's ban on the use of race in college acceptance decisions was unconstitutional.

What's unusual is that the case will be heard by just Supreme Court eight justices, with Justice Elena Kagan choosing to sit-out the case.

The case, Schuette v. Coalition to Defend Affirmative Action, involves a 2006 constitutional amendment approved by Michigan voters – Michigan's Proposal 2 – that bans affirmative action in the state. A closely-divided U.S. Court of Appeals for the Sixth Circuit struck down the ban in 2012, six years after it was approved by 58 percent of the state's voters. That court held as a constitutional remedy and the ballot referendum ban that disadvantages minorities seeking access to school through affirmative action based on their race is in violation of equal protections.

The Supreme Court considered a similar race-based university admissions challenge at the University of Texas earlier this year and ruled on Fisher v. University of Texas in June. In that case, the University of Texas at Austin had been considering race as just one of many factors in choosing part of its freshman class. But the that the Fifth Circuit court was wrong in upholding a lower court's summary judgment in favor of Texas because the lower court had not applied strict enough scrutiny to the university's policy. The court left intact the precedent that diversity can be "a compelling government interest." That decision was considered somewhat of a victory for Abigail Fisher, the white female student who had claimed that UT-Austin rejected her application in 2008 because the school had unconstitutionally discriminated against her under its race-conscious admissions program. 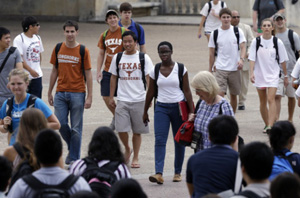 The Texas case and the current Michigan case present different issues for the court. The Texas case concerned questioned whether the use of race by universities who have an interest in building diverse student populations was sanctioned by the Supreme Court.

The Michigan case concerns a constitutional amendment – Michigan's Proposal 2 passed in 2006 – forbidding the use of race, sex, color, ethnicity, or national origin in college admissions decisions. The Michigan appeals court had ruled that Proposal 2's ban on race-conscious admission decisions "reorders the political process in Michigan to place special burdens on minority interests" and thus violates the Constitution's guarantee of equal protection for all races. The Supreme Court will tackle whether voters can actually ban such protections.

Seven years after Michigan's Prop 2 passed, Black enrollment has declined 30 percent at the University of Michigan in Ann Arbor, according to Bloomberg. In 2006, the last full year in which race was directly used in considering admissions, blacks had accounted for 6.4 percent of the freshman class (excluding foreign students). Last year, black enrollment was 4.6 percent. For Hispanic students, enrollment fell from 5.3 percent in 2006 to 3.9 percent in 2012.

The Supreme Court is scheduled to hear the Michigan case at 1pm on Tuesday, October 15.