Rep. Steve Pearce, who represents the state's border region and most Hispanic congressional district, has been bombarded in recent weeks by advocates who have camped outside his New Mexico offices and crowded his town hall gatherings. They also have met with him one-on-one in an attempt to get him to endorse a measure that would provide a path to citizenship for immigrants in the country illegally.

On Sunday, activists plan to bus in even more advocates from as far as Farmington for a rally in Pearce's hometown of Hobbs, a southeastern New Mexico city that rarely sees immigrant marches.

Similar rallies are being planned this weekend outside key GOP House members' offices around the country. In Illinois, for example, activists have scheduled a 30-mile march from Decatur to Taylorville on Friday to urge Republican U.S. Rep. Rodney Davis to support reforms. 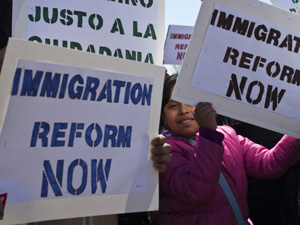 The actions come amid predictions that Pearce's southern district will be one of the fastest growing Hispanic areas in the country within the next 20 years.

But that doesn't mean Pearce feels any pressure or concern that the district will return to the Democratic column soon. Pearce is a veteran politician with a strong base and the district has a large number of conservative Latino voters who work in agriculture and the oil and gas industry, says Christina Medina, a government professor at New Mexico State University.

"It's definitely changing, but this is a district that has historically had lower voter turnout among Latinos," Medina said. "Any change in policy will have to depend how well (advocates) organize."

Activists think they are making headway with Pearce.

But Pearce, so far, has signaled no change in his positions on immigration reform. The conservative congressman says he wants a new guest worker program to help fix a "broken immigration system." He has stopped short of supporting a pathway to citizenship for those in the country illegally.

Still, a Pearce spokesman said the congressman will continue to hear people out on immigration reform.

"Productive dialogue is central to Rep. Pearce's work for New Mexico, and we've always welcomed groups of all views and backgrounds to join us in sharing ideas and concerns," spokesman Eric Layer said.