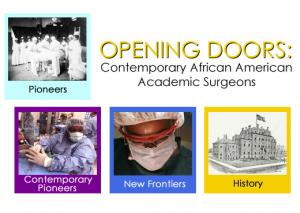 Opening Doors, an exhibit that displays the work of African-American academic surgeons, is now on display at Marshall University. Photo credit: www.nlm.nhs.gov

A traveling art exhibit showing the works of African-American academic surgeons is being hosted at Marshall University's medical school.

Officials at the Huntington school say the "Opening Doors" exhibit will be on display in the lobby of the Marshall University Medical Center on the campus of Cabell Huntington Hospital through Nov. 2.

The exhibit tells the stories of four pioneering surgeons and educators who exemplified excellence in their fields and believed in the importance of mentoring younger physicians and surgeons.

Other academic surgeons from around the country also are featured in the exhibit.

The exhibit has been traveling to medical schools and academic medical centers since 2007. It was developed and produced by the National Library of Medicine and the Reginald F. Lewis Museum of Maryland African American History and Culture.