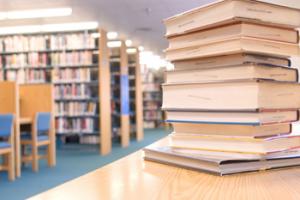 A 10,000 piece black history collection of books, tapes, film strips and other educational materials belonging to a Michigan school district were discarded. The collection in its diverse and comprehensive content rivaled that found in most community colleges. Photo Credit: feministcampus.org

A collection of black history books, tapes, film strips and other educational materials belonging to a Michigan school district were found strewn in garbage dumpsters outside the school's library.

The revelation left parents, educators and even students angered over the school board's apparent insensitivity. They are vowing to hold school officials more accountable about the way they inter-splice such materials and culture into the Highland Park School District's everyday curriculum.

In all, 1,000 items were recovered from the estimated 10,000 piece collection, many of them only after concerned and outraged citizens dove headfirst into large trash bins carrying flash lights, intent on saving whatever they could from the massive collection. According to several local historians and school educators, the school board has been assembling the collection as far back as the Civil Rights Movement. 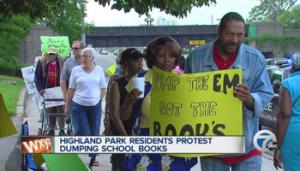 "In diversity, range and depth, that library rivaled most community -college libraries," said Highland Park resident Paul Lee, a historian who helped build the collection. Added Highland Park Board Vice President Debra Humphrey "I can't let you sit here and say this was a mistake."

But that's precisely what recently appointed special Emergency Manager Donald Weatherspoon would have you believe. Though he insists the materials ending up in the trash was all a grave error, in the same breath he somewhat callously admits the district simply can no longer afford to secure the collection.

He added his plan now is to sort through the materials and donate items he feels still hold historical significance to either another library or a museum.

"This speaks to a larger issue, … a disinvestment in urban areas," said city councilman Rodney Patrick. He later added "before the hefty bags come out," Weatherspoon and others should consider added options.

The end result to those acts has been a flood of ongoing protests. Residents held megaphone-wielding demonstration where they carried placards reading "21st Century Hitler Burning Books and "Dump The EM, Not The Books." 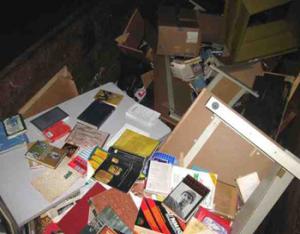 "The emergency manager had been in the district for over a year and then they decided to throw away all the black artifacts – books that were no longer in print or published, and all kinds of tapes and catalogues" said local musician Deblon Jackson. "We want to preserve those artifacts so our children have something to look back on. We're just mad about it and we're not going to stand for it, just throwing away our history like that."

Highland Park Renaissance Academy System Board Vice President Andre Davis even resigned his post in protest, but not before taking Weatherspoon to task, just as many of the others have chosen. Davis told reporters he holds Weatherspoon responsible for the situation and has found much of the leadership he has shown and decisions he has made since being appointed to be woefully lacking.

Jackson went on to say, "They don't want the children to read, in my opinion. How do you have a library with no books? How do you mistakenly throw books out?"