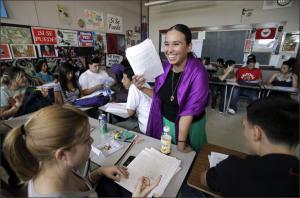 The Tucson Unified School District is to be commended for what is described as the most comprehensive desegregation plan in history. Photo Credit: edweek.org

TUCSON, Ariz. (AP) - The Tucson Unified School District (TUSD) is being applauded for developing and exceptionally good and comprehensive desegregation plan. The road to implementing a plan to bring racial balance to TUSD schools has been bumpy, with deadlines missed and contentious initiatives.

Still, a national desegregation expert, Willis Hawley, says the Tucson Unified School District is to be commended for "what is the most comprehensive desegregation plan in history. Not every deadline has been met, but that's understandable. There's an enormous amount of work going on. Has everything been perfect? No. Is everything amazingly good? Yeah. I think they're making good progress, Hawley said."

Hawley, the special master in charge of overseeing the district's implementation of the unitary status plan, is confident the initiatives will result in success for students because the framework is based on comprehensive school-improvement research.

There are a total of 180 tasks within those projects, 63 percent of which are in progress or have been completed. The remaining tasks have not been started, even though deadlines are looming. TUSD desegregation director Sam Brown acknowledges deadlines have been missed - some by 20 days, others by two months.

"The key from the district's point of view, at least thus far, is that meeting a deadline is not as important as quality," Brown said. "If we miss a deadline by 20 days but we get a better product for it and better outcomes for students for it, then it's worth missing a deadline." He added no deadlines have been missed because they were forgotten or ignored, but rather because the district was not ready for it and was not willing to do something just for the sake of saying it was done. 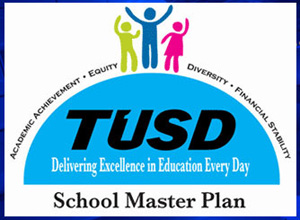 The TUSD Governing Board received an update on the implementation Tuesday during a special study session. Some of the initiatives highlighted include: The creation of a flag system that will track student attendance, academics and behavior; efforts to increase the diversity of staff and administrators, and to increase teacher quality at low-achieving schools; the development of a magnet plan to identify whether programming needs to be revised, relocated or eliminated; revising the admissions process for the district's award-winning University High School to increase diversity in the student body by possibly including an academic resiliency test, which would measure a student's ability to effectively deal with setbacks, stress or pressure in an academic setting; assessing advanced learning experiences – gifted and talented education, honors, Advanced Placement and other offerings – to ensure they are available to all students; the creation of culturally relevant and multicultural curriculum; utilizing restorative practices and positive behavioral intervention and supports as discipline tools for students, and creating corrective action plans for schools with excessive referrals and suspensions; and reviewing family engagement programs – which schools do them and do them well.

The keys to ensuring success, according to Hawley, are making sure that the entire TUSD organization – not just administration – knows what the goals and priorities are. "It's what happens between kids and teachers that makes the difference," Hawley said. "That means the investment, if you will, in the human capital of this district s critical."

That awareness must be paired with professional development on how to implement the new practices. It's not enough to simply launch new programs and systems, Hawley said. Goals need to be measured, and there must be a continuous process of assessment "for the purposes not of beating people up or finding fault but of moving forward."

There will be constant monitoring and reporting on the work being done both internally and externally, allowing for more transparency and accountability, Brown said.

"This is a first step in that direction."