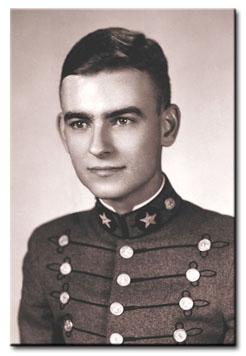 Jonathan, a divinity student from New Hampshire, was killed by a white gunman while protecting a black teenage girl in August 1965. Photo credit: vmi.edu

HAYNEVILLE, Ala. (AP) — On Aug. 10, a pilgrimage will be held in remembrance of a civil rights activist murdered while shielding a black teenage girl. The activist was shot by a white gunman in central Alabama in 1965.

Jonathan Myrick Daniels, who was a student at Episcopal Divinity School in Cambridge, Mass., was killed in Haynesville in Lowndes County on Aug. 20, 1965.

Daniels was fatally shot by a part-time deputy, who is now deceased, at a small country store. Richard Morrisroe, then a young Catholic priest, was wounded. An all-white jury later acquitted 55-year-old Tom Coleman of manslaughter in Daniels' death.

Daniels, 26, of Keene, N.H., had joined in the march from Selma to Montgomery, Ala., and then decided to stay in Alabama to work as part of the civil rights movement.

Witnesses said Daniels was trying to protect Ruby Sales, a black teenager. She and Gloria Harry House, who was nearby when Daniels was shot, will participate in the pilgrimage next month.

At the time of the shooting, Daniels, Sales and others had just finished spending a week in the Hayneville city jail after being arrested for participating in a voting rights demonstration in Fort Deposit. She told The Associated Press on Monday that it was a stifling hot August day and that one of the first things they wanted after getting out of jail was to go to a store and get a cold drink.

"We were hot and thirsty," she said. She said it was an integrated group that headed toward the store. Daniels was white and was planning to become a minister. She and some of the others were black.

Daniels, Morrisroe, Sales and another black teenager who walked into the store were met by Coleman, who was wielding a shotgun.

According to a 2000 AP report, Morrisroe said that Coleman cursed at Sales and leveled his shotgun at them. Daniels pushed her to the ground just before a shotgun blast struck him in the chest, killing him instantly. A second shot hit Morrisroe in the back as he shoved the other black teenager behind a parked car.

On hearing of Daniels' death, the Rev. Martin Luther King, Jr., called it "one of the most heroic Christian deeds of which I have heard in my entire ministry."

The Virginia Military Institute later established a humanitarian award in honor of Daniels, who was valedictorian of the 1961 VMI class.

The pilgrimage will end in the courthouse with a service of holy communion in the courtroom where Coleman was tried and acquitted.

Sales is a founder and director of Spirit House, an organization working to bring diverse people together to work for racial economic and social justice, as well as for spiritual maturity.

She said she thought the fact that she was black and Daniels was white provided motivation for the shooting.

She said it is ironic that the 1965 shooting occurred when blacks were struggling for the right to vote and the pilgrimage will be held not long after the recent Supreme Court ruling threw out the main enforcement provision of the federal Voting Rights Act.