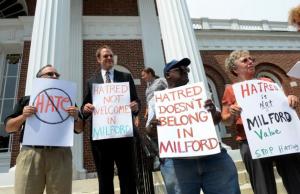 The governor, officials and citizens in Milford, Connecticut made it clear that the Ku Klux Klan was not welcome after fliers were left in their neighborhoods. Photo Credit: stamfordadvocate.com

MILFORD, Conn. (AP) - Gov. Dannel P. Malloy and other officials declared Wednesday that the Ku Klux Klan was not welcome in Connecticut after fliers were left in Milford by the United Klans of America advertising a neighborhood watch group.

Members of the group are worried about the safety of Milford's neighborhoods and the fliers were meant to deter criminals who have been breaking into cars in the city, Bradley Jenkins, imperial wizard of the Alabama-based white supremacist group, said Tuesday. Authorities say there was not a rash of car break-ins.

"Let's be very clear: Klan and Klan affiliated organizations are not welcome in Connecticut," Malloy said, appearing at Milford City Hall with local and state officials and civil rights activists. "No one in their right mind is asking you to be here and I mean that."

Residents of the north end of the city found the fliers on their driveways and lawns Monday. The fliers read, "Neighborhood Watch: You can sleep well tonight knowing the UKA is awake."

Police Chief Keith Mello said 42 fliers were found Monday and police learned Wednesday another seven were left in another part of the city. He said it's illegal under state and local laws to leave advertisements on private property without the owners' permission and the group was warned to stop.

Police are investigating and seeking witnesses who saw people distributing the fliers. 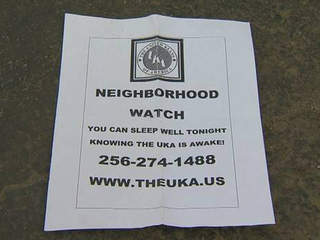 "It's a pathetic little attempt to get some press and some attention for his very, very weak group," said Mark Potok, senior fellow at the Southern Poverty Law Center, which tracks racist and hate groups.

But Potok said it's good for political leaders to condemn such moves.

Malloy said he initially didn't want to draw more attention to the incident, but once it captured public attention he decided he should address it.

"I don't want somebody soiling our state's reputation or Milford's reputation," Malloy said.

Jenkins became "something of a joke on the Klan scene" after aligning himself with a black street gang against another Klan group protesting in Memphis in the spring, Potok said. The center does consider UKA a hate group, he said, but was not aware of any violence by the group.

Jenkins' group was created last year and is not the original United Klans of America, which was responsible for much of the violence during the civil rights movement but was destroyed by a lawsuit by the poverty center in the mid-1980s, Potok said. He said there are nearly 30 Klan groups in the United States with at most 5,000 members, compared with some 4 million in the 1920s.

He said there has been violence by individual Klan members from time to time in recent years.

"There's certainly violence from Klansmen out there but it's not endemic in the way that it was in former iterations of the Klan," Potok said.