What Did Lincoln Really Think About Slavery? 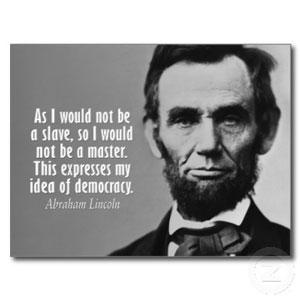 We all think we know how Abraham Lincoln felt about slavery. After all, he’s the one who freed the slaves, so he must have hated it.

That’s true, and once Lincoln decided to issue the Emancipation Proclamation, slavery was a goner. But that’s not the whole story.

Personally, Lincoln always hated slavery. This likely came from his father, Thomas Lincoln, who had moved his family out of Kentucky because of his hatred of slavery.

However, Lincoln was not an abolitionist. These were the people in 19th century America who wanted slavery abolished. The problem was that slavery was legal in America; the U.S. Constitution allowed it. So, as much as he might hate it personally, slavery was legally protected in America.

So Lincoln, particularly when he got into politics, adopted a position on slavery that many others had, he opposed slavery from spreading beyond the states where it already existed, but he did not feel the federal government had the right to abolish slavery, because it was protected by the Constitution. Lincoln hoped that by limiting slavery, eventually it would just wither up and die, like a branch snapped off a tree.

Other things Lincoln thought about African-Americans would be considered racist today, but remember that it is impossible to judge historical figures by contemporary standards. He didn’t think African-Americans were equal to whites in intellect or ability. He didn’t believe blacks should vote, serve on juries, or inter-marry with whites. He also felt blacks should be resettled outside of the United States.

However, one thing was always clear with Lincoln: When the Declaration said, "all men are created equal," it meant whites as well as blacks. No matter what else he thought, that was the guiding principle by which he lived his life.